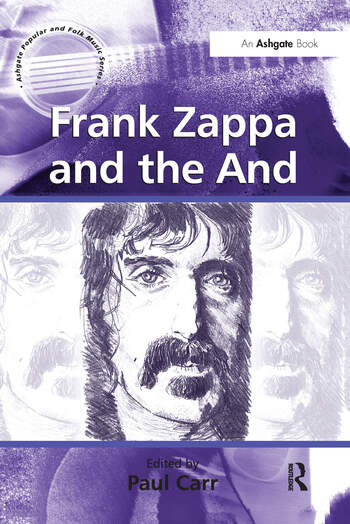 Frank Zappa and the And

This collection of essays, documented by an international and interdisciplinary array of scholars, represents the first academically focused volume exploring the creative idiolect of Frank Zappa. Several of the authors are known for contributing significantly to areas such as popular music, cultural, and translation studies, with expertise and interests ranging from musicology to poetics. The publication presents the reader with an understanding of the ontological depth of Zappa's legacy by relating the artist and his texts to a range of cultural, social, technological and musicological factors, as encapsulated in the book's title - Frank Zappa and the And. Zappa's interface with religion, horror, death, movies, modernism, satire, freaks, technology, resistance, censorship and the avant-garde are brought together analytically for the first time, and approached non chronologically, something that strongly complies with the non linear perspective of time Zappa highlights in both his autobiography and recordings. The book employs a variety of analytical approaches, ranging from literary and performance theory, 'horrality' and musicology, to post modern and textually determined readings, and serves as a unique and invaluable guide to Zappa's legacy and creative force.

Paul Carr is Head of the Division of Music and Sound and Reader in Popular Music Analysis at the ATRiuM, University of Glamorgan, in Cardiff. His research interests focus on the areas of musicology, widening access, the music industry and pedagogical frameworks for music related education - publishing in all of these areas. Publications include ’An analysis of post 1970’s electric guitarists who have fused the jazz aesthetic with other music forms’ (Book chapter in De-Canonizing Music History, 2009), ’Researching the Development of a Foundation Degree in Musical Instrument Retail Management: A Case Study Partnership between Glamorgan University and Roland UK’ (Journal of Applied Research in Higher Education, 2010) and ’An Autocratic Approach to Music Copyright?: The potential negative impacts of restrictive rights on a composer's legacy: The case of the Zappa Family Trust’ (Contemporary Theatre Review, 2011). He is also an experienced performing musician, having toured and recorded with artists as diverse as The James Taylor Quartet and former Miles Davis saxophonist Bob Berg.

’Editor Paul Carr has assembled an impressive collection of writers for this anthology, and each contributes a fascinating essay on an artist whose vision had seemingly no boundaries... a volume in which it’s hard to find a weak spot, each essay offering a unique perspective on a man who apparently eschewed academic discussion of his works and the academy itself... He [Zappa] might have appreciated this work, which doesn’t attempt the usual tricks of trying to create or dispel a myth but instead focuses on the character of its subject, the richness of his work, and the beauty of his mind.’ PopMatters ’... a rigorously academic dissection - with copious footnotes, scrupulous cross-referencing, etc - of Zappa’s creative idiolect�... a book that punches its intellectual weight with assiduous thoroughness... Frank Zappa And The And provides the most vital and thought-provoking interpretation of the man’s output we’ve yet come across. Illuminating touchstones invoked along the way include Invasion Of The Body Snatchers, Dead Of Night, Salvador DalÃ­, Aldous Huxley and MR James.’ Record Collector Magazine '... the writing is focused, rewarding and [...] entertaining.' The beat ’ ... an enjoyable and erudite collection ... an appropriately politically and philosophically layered, integrated but eclectic mosaic on Zappa which should prove a further boon ... to the already thriving subdiscipline of Zappology’. Popular Music

Frank Zappa and the And