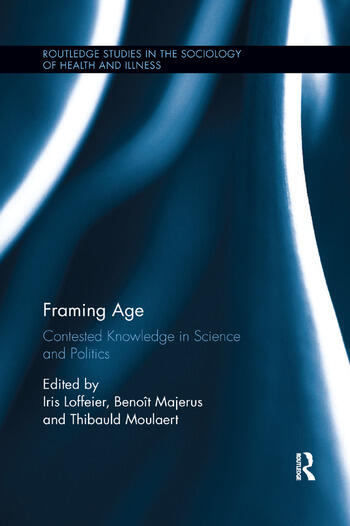 Ageing populations have gradually become a major concern in many industrialised countries over the past fifty years, drawing the attention of both politics and science. The target of a raft of health and social policies, older people are often identified as a specific, and vulnerable, population. At the same time, ageing has become a specialisation in many disciplines - medicine, sociology, psychology, to name but three – and a discipline of its own: gerontology.

This book questions the framing of old age by focusing on the relationships between policy making and the production of knowledge. The first part explores how the meeting of scientific expertise and the politics of old age anchors the construction of both individual and collective relationships to the future. Part II brings to light the many ways in which issues relating to ageing can be instrumentalised and ideologised in several public debate arenas. Part III argues that scientific knowledge itself composes with objectivity, bringing ideologies of its own to the table, and looks at how this impacts discourse about ageing. In the final part, the contributors discuss how the frames can themselves be experienced at different levels of the division of labour, whether it is by people who work on them (legislators or scientists), by people working with them (professional carers) or by older people themselves.

Unpacking the political and moral dimensions of scientific research on ageing, this cutting-edge volume brings together a range of multidisciplinary, European perspectives, and will be of use to all those interested in old age and the social sciences.

Part 1: Future at the Heart of the Ageing Region

1. Demographic Change as Dystopia: Contemporary German Discourses on Ageing, between Science and Politics

2. Recommendations Concerning the Use of Physical Exercise to Improve the Wellbeing of Older People in France

3. ‘Regimes of Hope’ in Planning Later Life: Medical Optimism in the Field of Anti-Ageing Medicine

4. Nationalism and the Moral Economy of Ageing

6. Toward a Biopolitics of Old Age: Vulnerability and Ageing in Postwar France

8. The Breakdown of Consensus on Pro-Natalist Policies: Media Discourse, Social Research and a New Demographic Agreement

9. The Social Construction of Dependency: Controversies in France Around an Assessment Instrument in France

10. Discerning Ageing in Relation to the Law? Debates on the Legal Framework of Freedom of Movement of the Elderly in France between 2004 and 2015

Benoît Majerus is an Associate Professor at the University of Luxembourg, Luxembourg.

'Framing Age is a lively collection of twelve chapters by international scholars who explore the intersectional and fragmented knowledges, policies, sciences, ethics, and cultures of ageing that shape public understanding of population politics today. The combined research leaves readers with an accessible but critical vision of the boundaries by which we negotiate inclusion and exclusion, ageing and anti-ageing, and self and society. Kudos to editors Thibauld Moulaert, Benoît Majerus and Iris Loffeier for bringing forth this masterful and timely text.' - Stephen Katz, Trent University, Canada