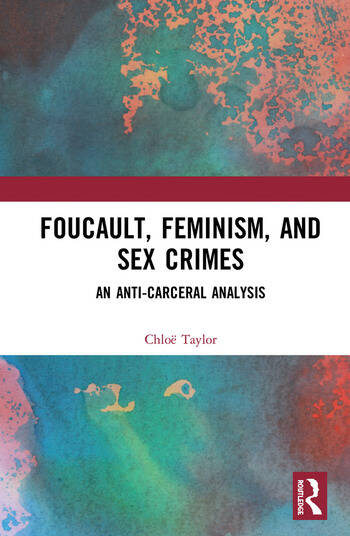 This book brings together Foucault's writings on crime and delinquency, on the one hand, and sexuality, on the other, to argue for an anti-carceral feminist Foucauldian approach to sex crimes. The author expands on Foucault’s writings through intersectional explorations of the critical race, decolonial, critical disability, queer and critical trans studies literatures on the prison that have emerged since the publication of Discipline and Punish and The History of Sexuality.

Drawing on Foucault’s insights from his genealogical period, the book argues that those labeled as sex offenders will today be constructed to re-offend twice over, once in virtue of the delinquency with which they are inculcated through criminological discourses and in the criminal punishment system, and second in virtue of the manners in which their sexual offense is taken up as an identity through psychological and sexological discourses. The book includes a discussion of non-retributive responses to crime, including preventative, redistributive, restorative, and transformative justice. It concludes with two appendixes: the original 19th-century medico-legal report on Charles Jouy and its English translation by the author.

Foucault, Feminism, and Sex Crimes will be of interest to feminist philosophers, Continental philosophers, Women’s and Gender Studies scholars, social and political theorists, as well as social scientists and social justice activists.

1. The Case of Charles Jouy and Sophie Adam

7. The Perverse Implantation and Sex Work

9. The Social Construction of the Serial Sex Killer

Chloë Taylor is Associate Professor of Women’s and Gender Studies at the University of Alberta, Canada. She is the author of The Routledge Guidebook to Foucault’s The History of Sexuality (Routledge 2017) and The Culture of Confession from Augustine to Foucault: A Genealogy of the ‘Confessing Animal’ (Routledge 2009). She is also the co-editor of Feminist Philosophies of Life (2016) and Asian Perspectives on Animal Ethics: Rethinking the Nonhuman (Routledge 2014).