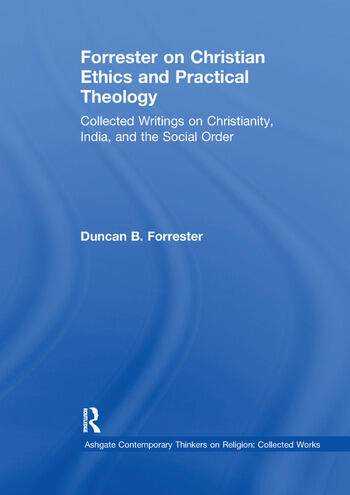 Forrester on Christian Ethics and Practical Theology: Collected Writings on Christianity, India, and the Social Order

Bringing together articles and chapters from his considerable work in theological ethics, India, and the social order, Duncan Forrester incorporates new writing and introductions to each thematic section to guide readers through this invaluable resource. This book offers stimulating studies in three related areas - Indian Christianity with particular attention to the caste system, contemporary Christian theological ethics, and the distinctive and challenging theological approach that Duncan Forrester has developed in relation to public issues such as prisons and punishment, welfare provision, social justice, and poverty.

Contents: Preface; Introduction: formative practices in Christian theology; Part I India: Encountering Munuswamy; The end of equality?: a strange silence in public debate. Caste: Hierarchy, equality and religion; The revolt of 1857 and the caste question; Caste and mass movements; Caste and Christianity since Gandhi and Ambedkar, Adrian Bird. Christian Theology in India: Christianity and early Indian nationalism; Christian theology in a Hindu context; Commensalism and Christian mission: the Indian case; Professor Hick and the universe of faiths. Part II Practical Theology: Introduction; Divinity in use and practice; Some thoughts on 'religionless Christianity'; The chaplain as educational counsellor; The liberation of worship; Living in truth and unity: the Church as a hermeneutic of law and gospel; Anthropology in modern theology; Biblical interpretation and cultural relativism; The communicative practice of a humble Church; The future of theology: the vocational and the academic in theological education. Part III Christian Ethics: Introduction; The place of the Church in the new Europe; Justice as an issue for contemporary practical theology; Ecclesia Scoticana; The Church and the concentration camp: some reflections on moral community. Part IV Political Theology: Introduction; The political teaching of Luther (1483-1546) and Calvin (1509-1564); The political teaching of Richard Hooker (1553-1600); The problem of natural law in theology and social science; The attack on Christendom in Marx and Kierkegaard; Mystique and politique; The theological task; The promise of liberation theology; The Church, theology and the poor; Can liberation theology survive 1989?; Violence and non-violence in conflict resolution: some theological reflections; Social justice in Protestant thought. Part V Public Theology: Introduction; The scope of public theology: what is public theology?; Punishment and prisons in a morally fragmented society; Ethics and salvation; Education and

Duncan B. Forrester was ordained as a Presbyter of the Church of South India in 1962. As a Church of Scotland missionary he taught Politics at Madras Christian College for eight years. After a period as Chaplain and Lecturer in Politics and Religious Studies at the University of Sussex, he was appointed in 1978 to the Chair of Christian Ethics and Practical Theology in New College, University of Edinburgh. He was Principal of New College from 1986-96, and Dean of the Faculty of Divinity from 1996-2000. He established and was first Director of the Centre for Theology and Public Issues. He retired in 2001. His book, Caste and Christianity: Attitudes and Policies on Caste of Anglo-Saxon Protestant Missionaries (Curzon: 1980) is a classic, and he has published many articles on Indian politics, society and religion. His recent books include The True Church and Morality: Reflections on Ecclesiology and Ethics (WCC, 1997), Christian Justice and Public Policy (Cambridge University Press, 1997), Truthful Action: Explorations in Practical Theology (T. & T. Clark, 2000), On Human Worth: A Christian Vindication of Equality (SCM Press, 2001), Theologicl Fragments: Explorations in Unsystematic Theology (Continuum,2005), and Apocalypse Now? Reflections on Faith in a Time of Terror (Ashgate, 2005).

'... this marvellous and astonishingly varied collection of his work from 1957 onwards reveals huge consistencies: a passion for social justice combined with an eirenic voice, a complete absence of jargon, a profound sympathy with ordinary people, and commitment to the life of the church... a tremendously useful collection for anyone working in the broad area of political theology and ethics and we have to be grateful to Ashgate for publishing it.' Modern Believing '... this book brings together Duncan Forrester’s considerable collection of articles, spanning over fifty years... His invaluable contributions to practical, public and political theology as well as Christian ethics make this a valuable resource which should not only be included in reading lists for these disciplines, but which makes essential reading for anyone interested in the relationship between Christianity and civil society... Any theologian is sure to find inspiration in these 500 pages. This is a collection of essays that certainly demonstrates the passion with which theology should be pursued!' The Expository Times

Forrester on Christian Ethics and Practical Theology: Collected Writings on Christianity, India, and the Social Order