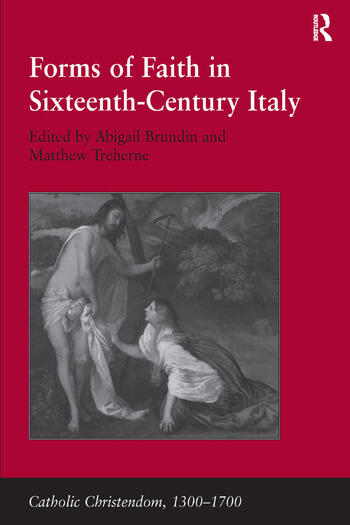 Forms of Faith in Sixteenth-Century Italy

The sixteenth century was a period of tumultuous religious change in Italy as in Europe as a whole, a period when movements for both reform and counter-reform reflected and affected shifting religious sensibilities. Cinquecento culture was profoundly shaped by these religious currents, from the reform poetry of the 1530s and early 1540s, to the efforts of Tridentine theologians later in the century to renew Catholic orthodoxy across cultural life. This interdisciplinary volume offers a carefully balanced collection of essays by leading international scholars in the fields of Italian Renaissance literature, music, history and history of art, addressing the fertile question of the relationship between religious change and shifting cultural forms in sixteenth-century Italy. The contributors to this volume are throughout concerned to demonstrate how a full understanding of Cinquecento religious culture might be found as much in the details of the relationship between cultural and religious developments, as in any grand narrative of the period. The essays range from the art of Cosimo I's Florence, to the music of the Confraternities of Rome; from the private circulation of religious literature in manuscript form, to the public performances of musical laude in Florence and Tuscany; from the art of Titian and Tintoretto to the religious poetry of Vittoria Colonna and Torquato Tasso. The volume speaks of a Cinquecento in which religious culture was not always at ease with itself and the broader changes around it, but was nonetheless vibrant and plural. Taken together, this new and ground-breaking research makes a major contribution to the development of a more nuanced understanding of cultural responses to a crucial period of reform and counter-reform, both within Italy and beyond.

’The strength of this book is its disengagement from periodization, choosing not to endorse a single point of view from which to analyze Italy’s volatile religious climate... The Result is a volume that conveys the full richness and complexity of sixteenth-century religious culture in Italy.’ Renaissance Quarterly 'The series [Catholic Christendom, 1300-1700] has some remarkable contributions, and the coeditors of this volume have produced another. ... The essays collected here fit nicely with the other works in this Ashgate series, books that indeed are humanizing our understanding of religious expression in the early modern world.' Sixteenth Century Journal

Forms of Faith in Sixteenth-Century Italy