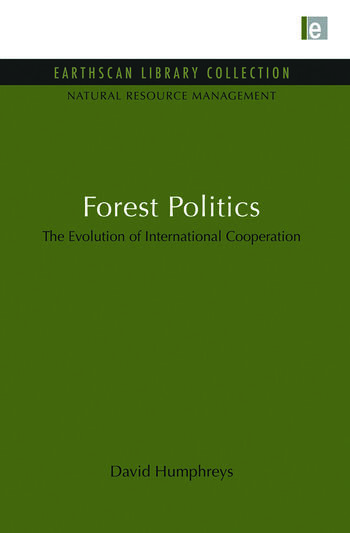 'An important and timely book' from the Foreword by Stanley Johnson 'A complete and absorbing history of a decade of intense international politics offers many insights for future negotiators of sustainable solutions' Stephen Bass, International Institute for Environment and Development 'Skillfully navigates the jungle of forest politics, leaving us in no doubt that the verbal commitment to save the world's forests has yet to be translated into action on the ground. The way forward must clearly lie in political commitments and international cooperation if forests are to continue to preserve life on Earth' Francis Sullivan, World Wide Fund for Nature Global deforestation and its attendant processes - including soil degradation, climate change and the loss of biological diversity - emerged as international political issues during the 1980s, prompting politicians to seek consensus on programmes and policies for the conservation and sustainable management of forests. Yet global initiatives have been bedevilled by tensions between the North and South and between governments, industry, local communities and indigenous peoples. Meanwhile, rates of deforestation in the tropics are increasing, and international political efforts are demonstrably failing. Forest Politics carefully traces the evolution of international cooperation on forests, from the inception of the controversial International Tropical Timber Organization and the failed Tropical Forestry Action Programme in the mid-1980s, to the creation of the Intergovernmental Panel on Forests in the mid-1990s. The book also provides a detailed analysis of the negotiating stances of the parties involved in the divisive negotiations that rook place prior to the 1992 'Earth Summit' in Rio de Janeiro and the equally factious negotiations for the International Tropical Timber Agreement of 1994. It provides a fascinating insight into the nature of such processes, illustrating the difficulties that arise when concepts such as 'global commons' come into conflict with national sovereignty. Complete with annexes of important political documents, and making extensive use of primary source material and interviews with participants. Forest Politics presents case studies of all the major forest negotiations over the last 13 years. It is an essential reference point for policy makers, environmental campaigners and students, and required reading for all those who care about the future of the world's forests. David Humphreys is Research Fellow in Global Environmental Change at the Open University. Originally published in 1996

List of Figures, Tables and Boxes Acknowledgements Foreword by Stanley Johnson Introduction 1 Deforestation as a Global Political Issue The Political Complexity of Deforestation B The Causes of Deforestation B The Effects of Deforestation B The Emergence of Forest Conservation as an International Political Issue B The Forest Conservation Problematic 2 The Tropical Forestry Action Programme The Origins of the TFAP The Organizational Structure of the TFAP at the International Level B The Formulation and Evolution of a National Forestry Action Programme W The 1990 Legitimacy Crisis The TFAP Restructuring Process 3 The International Tropical Timber Organization International Tropical Timber Agreement, 1983 The Institutional Structure of the ITTO The Financing of the ITTO The History of the ITTO B The International Relations of the ITTO 4 The Forest Negotiations of the UNCED Process Proposals for a Global Forests Instrument The Draft Global Forests Convention of the FAO UNCED: an Introduction Explaining North-South Disagreement During the UNCED Forest Negotiations PrepCom 1, Nairobi, 6-31 Augilst 1990 PrepCom 2, Geneva, 18 March-5 April 1991 PrepCom 3, Geneva, 12 August4 September 1991 Environmental Diplomacy between PrepComs 3 and 4: Abidjan and Caracas PrepCom 4, New York, 2 March-3 April 1992 Second Ministerial Meeting of Developing Countries, Kuala Lumpur, April 1992 UNCED, Rio de Janeiro, 3-14 June 1992 Conclusions The Negotiation of the International Tropical Timber Agreement, 1994 The Preparatory Process First Part of Conference, Geneva, 13-16 April 1993 Environmental Diplomacy between the First and Second Parts of the Conference Second Part of Conference, Geneva, 21-25 June 1993 Environmental Diplomacy between the Second and Third Parts of the Conference Third Part of Conference, Geneva, 4-15 October 1993 Fourth Part of Conference, Geneva, 10-26 January 1994 The North's Demand for a Global Forests Convention An Analysis of the International Tropical Timber Agreement, 1994 Concluding Remarks The Global Politics of Forest Conservation Since the UNCED Confidence-building Initiatives The Criteria and Indicators Processes The Third Session of the CSD: Creation of the Intergovernmental Panel on Forests The World Commission on Forests and Sustainable Development Prospects for the Future Conclusions The Continuing Demand from the North for a Global Forests Convention Explaining North-South Disagreement in Global Forest Politics Contents The Forest Conservation Problematic Conclusions Notes Annex A: Possible Main Elements of an Instrument (Convention, Agreement, Protocol, Charter) for the Conservation and Development of the World's Forests Annex B: Non-legally Binding Authoritative Statement of Principles for a Global Consensus on the Management, Conservation and Sustainable Development of all Types of Forests Annex C: International Tropical Timber Agreement, 1994 Annex D: Draft text for a Convention for the Conservation and Wise Use of Forests Recommended Further Reading Acronyms Index