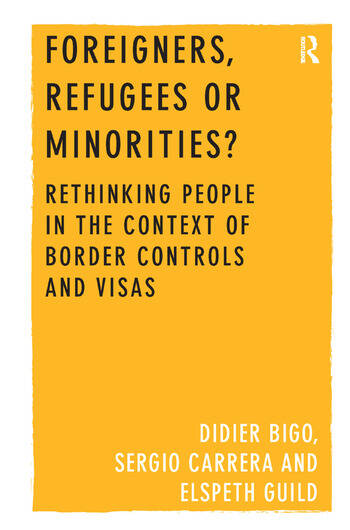 Foreigners, Refugees or Minorities?: Rethinking People in the Context of Border Controls and Visas

When immigration policy and the treatment of Roma collide in international relations there are surprising consequences which are revelatory of the underlying tensions between internal and external policies in the European Union. This book examines the relationship of citizenship, ethnicity and international relations and how these three aspects of the State, its people and its neighbours relate to one another. It studies the wide issue of international relations, citizenship and minority discrimination through the lens of the case study of European Roma who seek refugee status in Canada on account of their persecution in Europe. The volume assesses the relationships among citizenship, state protection and persecution and minority status, and how they can intersect with and destabilize foreign affairs. The central background to the book is the European treatment of Roma, their linkages with visa and asylum policies and their human rights repercussions . The various contributions reveal how modern liberal democracies can find themselves in contradictory positions concerning their citizens - when these are looking for protection abroad - and foreigners - in search of international protection - as a consequence of visa and pre-border surveillance policies and practices.

Didier Bigo is Professor of International Relations (and MaÃ®tre de conférences des universités) at Sciences-Po Paris, France, and Researcher at CERI/FNSP. Bigo is also Professor at Kings College London, UK. Sergio Carrera is Senior Research Fellow and Head of the Justice and Home Affairs Programme at the Centre for European Policy Studies (CEPS), Belgium. Elspeth Guild is a Jean-Monnet Professor of European migration law at the Radboud University Nijmegen (The Netherlands). She is also Senior Research Fellow at the Centre for European Policy Studies in Brussels and a partner at the London law firm Kingsley Napley. She is a Visiting Professor at the LSE London and teaches in the Department of War Studies at Kings College London.

’This collection examines the situation of the EU’s Roma through a novel and insightful perspective. It convincingly challenges current policy and practice that exceptionalise the Roma and deprive them of the right to free movement promised to all EU citizens.’ Nando Sigona, Refugee Studies Centre, University of Oxford, UK ’The constitutive and always troubling distinction between human beings in general and citizens of particular political jurisdictions in an international order has itself been disturbed in many places, not least in Europe. No doubt very large structural forces are at play in this respect, but this book examines the at least equally important role of very specific practices and policies at work at the boundaries between national jurisdictions. An initial examination of European Roma seeking refugee status in Canada opens out into a series of sharp insights into the contested meaning of security, the political framing of illegal immigration, new techniques of surveillance, and the effects of different refugee systems and forms of visa reciprocity. The precise details are crucial, and the book will be indispensable for anyone seeking to understand the emerging borders of contemporary politics, not only in Europe.’ R. B. J. Walker, University of Victoria, Canada ’A remarkably driven collection of essays. It starts by documenting the Canada-EU relationship, strained by the imposition of visas on Czech citizens to prevent Romas from accessing Canada. It develops however into an in-depth critical analysis of the whole visa and mobility regime as it is used by governments in the Global North, who seem to believe that their territorial sovereignty gives them the power to implement discriminatory policies with impunity. It is heartening to witness that courts, both domestic and international, have started to distinguish between discretion and arbitrariness and uphold the Rule of Law in favour of migrants.’ Francois Crepeau, UN Special Rappor

Foreigners, Refugees or Minorities?: Rethinking People in the Context of Border Controls and Visas