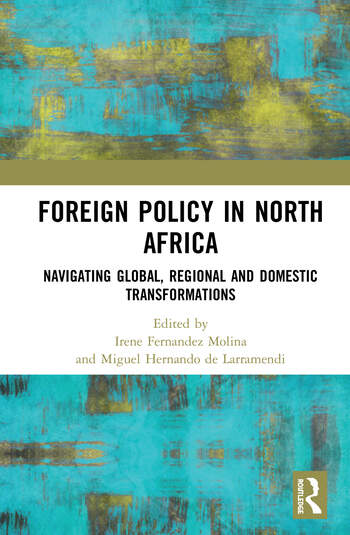 Available for pre-order. Item will ship after May 4, 2020
Add to Wish List
FREE Standard Shipping!

Foreign Policy in North Africa explores how the foreign policies of North African states, which occupy a peripheral and subaltern position within the global system, have actively responded to the constraints and opportunities stemming from multi-level transformations in the 2010s.

What has been the extent of continuity and change in each country’s foreign policy making and behaviour under such conditions? Which structural and agential factors explain the variations observed, or the lack thereof? Building on scholarship on foreign policy in the Global South and the Middle East and North Africa (MENA) as well as the international impact of the 2011 Arab uprisings, six country case studies each focus on a specific level of analysis. These range from the global – Tunisia’s financial predicaments and foreign debt negotiations – through the (sub)regional – Egypt’s relationship of necessity with Saudi Arabia, Algeria’s half-hearted policies towards the conflicts in Libya and Mali – to the domestic sphere – Morocco’s power balance between the monarchy and the Islamist-led government, Libya’s extreme state weakness and internal competition among proliferating actors –, reaching also the deeper non-state societal level in the case of Mauritania. The volume concludes by examining post-2011 developments in the longstanding Algerian-Moroccan rivalry which hinders regional integration in the Maghreb.

2. Modelling for a living: two-level games and rhetorical action in the foreign debt negotiations of post-revolutionary Tunisia

3. The foreign policy of post-Mubarak Egypt and the strengthening of relations with Saudi Arabia: balancing between economic vulnerability and regional and regime security

4. The dilemmas of Algerian foreign policy since 2011: between normative entrapment and pragmatic responses to the new regional security challenges

5. Moroccan foreign policy after the Arab Spring: a turn for the Islamists or persistence of royal leadership?

7. Weapons of the weak, and of the strong: Mauritanian foreign policy and the international dimensions of social activism

8. Doomed regionalism in a redrawn Maghreb? The changing shape of the rivalry between Algeria and Morocco in the post-2011 era

Irene Fernández-Molina is Lecturer in International Relations at the University of Exeter. Her research deals with international relations of the Global South, foreign policies of dependent and/or authoritarian states, conflicts, international socialisation and recognition, with a regional focus on North Africa, as well as EU foreign policy and Euro-Mediterranean relations.

is Professor of Arab and Islamic Studies at the University of Castilla-La Mancha, where he leads the Study Group on Arab and Muslim Societies (GRESAM) and the research project ‘Crises and regional processes of change in North Africa’. His research focuses on political systems in the Maghreb and Spanish foreign policy towards the region.