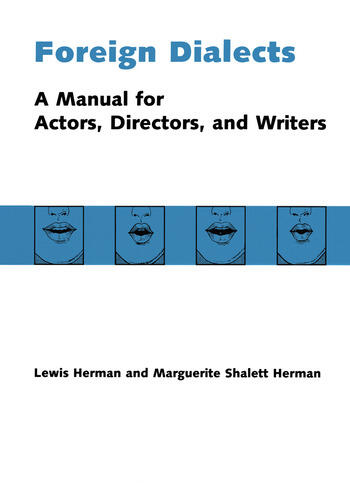 Foreign Dialects: A Manual for Actors, Directors, and Writers

Most actors and directors have struggled with the problem of needing to imitate foreign dialects. Marguerite and Lewis Herman have created an essential tool for actors, directors and writers aiming toward the most authentic performances possible.
Foreign Dialects contains an extensive repertoire of dialects that will assist the actor in the preparation for the most difficult foreign roles. Now in paperback, this classic text offers the director or producer a quick, convenient aid for correcting actors and evaluating applicants for authenticity and dialect ability. In addition, it guides those writing fiction as well as radio, movie, and television scripts. Thirty foreign dialects are provided, with character studies, speech peculiarities, and examples of the dialects in easy-to-read phonetic monologues--including Cockney, British, Irish, Scottish, French, German, Spanish, Swedish, Polish, Greek and Yiddish.

Lewis Herman and Marguerite Shalett Herman compiled this material during more than 25 years of acting, writing, teaching, and study, in Europe, Hollywood, Chicago, and New York. They also acted and directed for stage, television, radio, and motion pictures.

Foreign Dialects: A Manual for Actors, Directors, and Writers