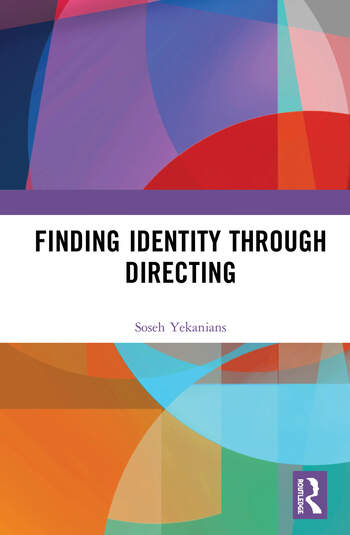 Finding Identity through Directing is a practice-led autoethnographical monograph that provides an in-depth exploration into the field of theatre directing and an individual’s endless creative pursuit for belonging. The book specifically examines how a culturally displaced individual may find a sense of identity through there directing and addresses the internal struggles of belonging, acceptance and Self that are often experienced by those who have confronted cultural unhoming. The first half of the story scrutinises Dr Yekanians’ own identity as an Iranian born Armenian-Australian and how she struggled with belonging growing up in a world that for the most part, was unaccepting of her differences. The second half, looks at how theatre directing, aided her (re)discovery of Self. While evidence shows that within the past decade there has been a growing interest in the vocation of theatre directing, embarking on a career within this field, while exciting, can often be a daunting and experimental vocation. Finding Identity through Directing questions this conundrum and specifically asks, in a competitive artistic profession that is rapidly developing, what attracts an individual to the authoritative role of the director and what are the underlying motivations of this attraction? By uncovering that there is more to the role of the director than the mere finality of a production, we can observe that the theatre is a promising setting for cultural exchanges in dialogue and for personal development. Theatre directing as the vehicle for these expansions and progressions of self can potentially address the internal struggles of identity often experienced by those who, in some form, have encountered cultural displacement.

Structure of the Book 6

Chapter One: Attracted to Theatre 18

The Essence of Theatre 19

Theatre as a Social Construct *3

The Theatre and Me 26

Flirting with the "Unhomely" and the "In-Between" 49

Chapter Three: Affinity with Armenia, a Narrative in Two Parts 62

Part I What Went Before 62

Birth of a Nation 62

The Beginnings of the Invaders 65

The Republic of Armenia Today 71

My Voyage from a Dream to Reality 72

Part II The Journey Back 76

Turning Points in the Research 98

Immersion into the Practice of Directing 112

No Worries and Uncle Jack 112

Dr Soseh Yekanians is a senior lecturer in Theatre Media at Charles Sturt University. While her research focuses on understandings of Self, belonging and identity formation with specific reference to theatre directing, she is also fascinated with how theatre and the performing arts more generally, can speak to an individual’s sense of displacement. Dr Yekanians hopes that with more research on how cultural stereotypes manifest in individuals through the pressures of society and how these stereotypes are performed via theatrical representations onstage, performance as a cultural phenomenon can begin to break down harmful stereotypes and offer cross-cultural exchanges that develop and empower people’s (re)discovery of identity offstage.