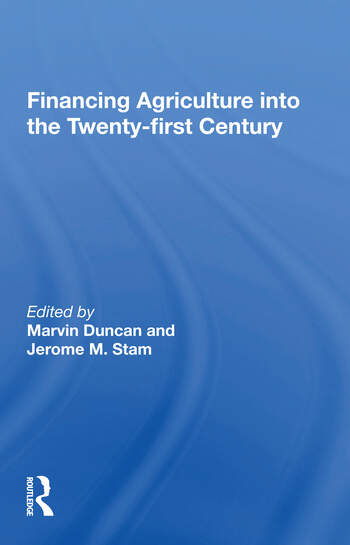 Financing Agriculture Into The Twenty-first Century

This volume is concerned with the paradigm shifts occurring in U.S. agriculture and its related financial services sector. The U.S. agricultural sector is undergoing rapid change with large segments commonly described as industrialized. Often observers focus on the technological and structural changes that the sector is undergoing and ignore other

Foreword -- Preface -- Introduction -- Forces Inducing Change -- Macroeconomic Factors and International Linkages Affecting the Financing of Agriculture in a World Economy -- Changes in the Farm Sector -- Future Directions for Agricultural Finance -- New and Changing Rules of the Game -- The Emerging Agricultural Lending System -- Emerging Strategies for Traditional Lenders -- Who Will be the Lenders and What Will They be Doing? -- The Role of Federal Credit Programs -- Emerging Nontraditional Lenders and Products -- Policy Implications -- Public and Private Policy Implications

"Marvin Duncan is professor of agricultural economics at North Dakota State University (NDSU). His work there focuses on rural financial markets, agricultural credit issues and institutions, rural economic development, and rural/agricultural policy. Dr. Duncan has been chairperson in the Department of Agricultural Economics at NDSU, as well. Prior to joining the NDSU faculty, he was a member of the board of the Farm Credit Administration (FCA), a presidentially 217 appointed position. During his service on the FCA Board, spanning the tumultuous years of the mid- to late 1980s, he was active in working with Congress as it developed legislative solutions to the financial problems of the U.S. Farm Credit System and in providing policy leadership in crafting the regulatory framework to implement that legislation. Duncan previously had been appointed Senior Deputy Governor at the FCA. Duncan had been a vice president and economist at the Federal Reserve Bank of Kansas City prior to joining the FCA where, as a member of the Bank’s Research Department, he led its research and analysis of the real sector of the Tenth Federal Reserve District economy. Duncan is widely published on issues within his research focus and is a sought-after commentator on issues of rural financial markets, agricultural credit, and agricultural and rural policy. Duncan has been a visiting scholar at the Economic Research Service of the U.S. Department of Agriculture and has been on a USDA advisory committee. Duncan holds B.S. and M.S. degrees from NDSU and a Ph.D. in agricultural economics from Iowa State University. Jerome Stam is Leader of the Finance Team in the Economic Research Service (ERS) of the U.S. Department of Agriculture, located in Washington, DC. His work involves conducting and managing an array of research, staff, and situation-outlook work dealing with agricultural credit policy, lending institutions, and financial innovations. He began his professional career with the field staff of ERS at St. Paul, Minnesota. During this five-year period, he also was an adjunct assistant professor and later associate professor in the Department of Agricultural and Applied Economics at the University of Minnesota. He has researched regional economics, economic development, public finance, and agricultural finance issues during his career. He has served as the secretary of the National Agricultural Credit Committee since 1984. Dr. Stam holds a B.S. in agriculture from the University of Nebraska, an M.S. and Ph.D. in agricultural economics from Michigan State University, where he was a National Defense Education Act Fellow, and a Master in Public Administration (MPA) degree from Harvard University. He has authored or coauthored numerous publications, articles, and papers. " 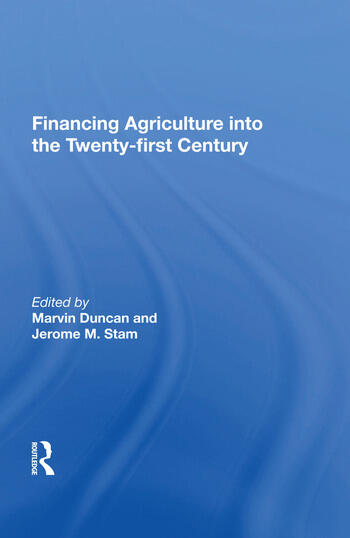 Financing Agriculture Into The Twenty-first Century