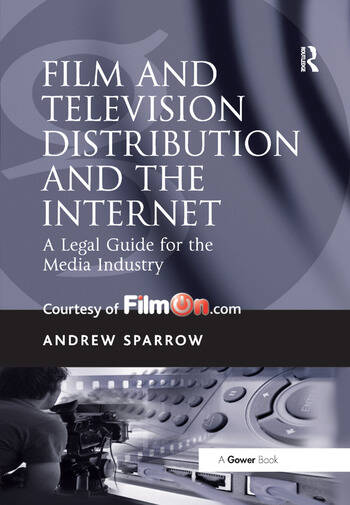 Film and Television Distribution and the Internet: A Legal Guide for the Media Industry

There is no area of business that is more dramatically affected by the explosion of web-based services delivered to computers, PDAs and mobile phones than the film and television industries. The web is creating radical new ways of marketing and delivering television and film content; one that draws in not simply traditional broadcasters and producers but a whole new range of organizations such as news organizations, web companies and mobile phone service providers. This companion volume to Andrew Sparrow's Music Distribution and the Internet: A Legal Guide for the Music Business focuses on the practical application of UK and EU law as it applies to the distribution of television and film through the internet. This includes terms of contract and copyright as they affect studios, broadcasters, sales agents, distributors, internet service providers, film financiers, and online film retailers; as well as areas such as the licensing of rights. It also covers the commercial aspects of delivering film and television services to a customer base, including engaging with new content platforms, strategic agreements with content aggregators, protecting and exploiting intellectual property rights, data and consumer protection, and payment, online marketing and advertising. The opportunities for companies operating in this area are extraordinary (as are the legal implications) and Andrew Sparrow's highly practical guide provides an excellent starting point for navigating through what is a complex area of regulation, contract, copyright and consumer law.

Andrew Sparrow is a national award winning solicitor and founder of Lecote Solicitors, a niche commercial law firm concentrating on internet, IT and new media law. Andrew is the author of several books on commercial and internet law. In a national poll conducted in 2004 and supported by the Department of Trade & Industry he was acknowledged as one of 100 individuals in the UK who have contributed most to the development of the internet in the last ten years.

'The minefield of rights clearances, new rights definitions and global distribution possibilities comes with a price. And that price is knowledge...This book is both an examination of the legal issues and a handbook in actually launching a film or TV programme into the new digital world. It could not be more timely.' - Peter Buckingham, Head of Distribution and Exhibition, UK Film Council 'This book is a handy introductory guide to some of the major legal and technical issues involved in marketing and distributing audiovisual content via the internet...In short, this is a useful book for those seeking some initial guidance to the headline issues and represents good value for money.' - Graeme Fearon, Entertainment Law Review

Film and Television Distribution and the Internet: A Legal Guide for the Media Industry