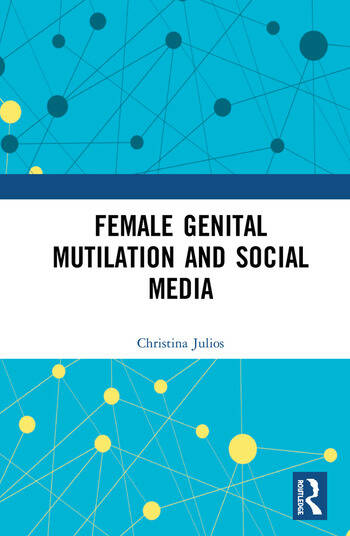 This book explores the phenomenon of anti-femail genital mutilation (FGM) social media activism. Against a backdrop of over 200 million girls and women worldwide affected by FGM, this volume examines key global online campaigns to end the practice, involving leading virtual platforms such as Twitter, Facebook and YouTube. Drawing from twenty-one fieldwork interviews with anti-FGM activists, frontline practitioners and survivors, the volume investigates opportunities and challenges inherent to cyberspace. These include online FGM bans as well as practices such as ‘cyber-misogyny’ and ‘clicktivism’.

By exploring anti-FGM online activism, this book fills a gap in the literature which has largely overlooked FGM’s presence in cyberspace as a virtual social movement. Female Genital Mutilation and Social Media will be of interest to activists, survivors, frontline professionals, students, academics and the wider public.

Christina Julios is an Honorary Research Fellow and Associate Lecturer at Birkbeck, University of London. She is also an Honorary Associate at The Open University and a Fellow of the Higher Education Academy. Previously, Dr Julios was Director of Policy and External Affairs at the Ethnic Minority Foundation, and has taught at Queen Mary, University of London. She is the author of Forced Marriage and ‘Honour’ Killings in Britain: Private Lives, Community Crimes and Public Policy Perspectives (Ashgate, 2015) and Contemporary British Identity: English Language, Migrants and Public Discourse (Ashgate, 2008).