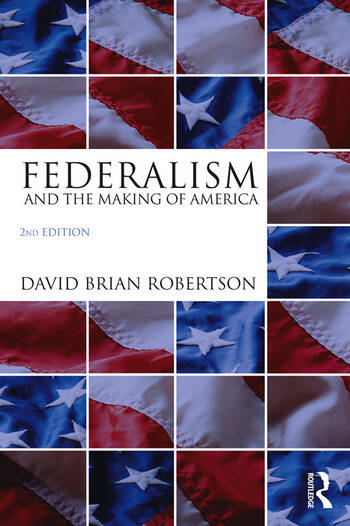 Federalism and the Making of America

Though Americans rarely appreciate it, federalism has profoundly shaped their nation’s past, present, and future. Federalism—the division of government authority between the national government and the states—affects the prosperity, security, and daily life of every American. Some of the most spectacular political conflicts in American history have been fought on the battlefield of federalism, including states’ rights to leave the union, government power to regulate business, and responses to the problems of race, poverty, pollution, abortion, and gay rights.

In the second edition of this nuanced and comprehensive text, David Brian Robertson shows that past choices shape present circumstances, and that a deep understanding of American government, public policy, political processes, and society requires an understanding of the key steps in federalism’s evolution in American history.

2. Federalism at the Founding

9. Federalism and Conservative Governance after 1980

10. American Federalism in the Twenty-First Century

Praise for the Second Edition

American federalism – the ongoing clash and cooperation between semi-sovereign states and the federal government – is recognized as profoundly important and consequential by everyone. Everyone, that is, except American political analysts, who have generally relegated it to a dusty corner of discussion. In this new edition of Federalism and the Making of America, David Brian Robertson blows off the cobwebs and helps us understand just how fundamental federalism is to our history , our democracy, and our daily lives. Along the way, he brilliantly shows why our federal system is at once so revered and so controversial: an engine of repression and inequality on the one hand, and an engine of representation and experimentation on the other. This is the book to read if you want to understand what makes our multi-layered political system tick.

Federalism has always been central to the workings of American government, but it takes on new dynamism in our era of extreme partisan polarization. During the Obama presidency, the federal division of powers offered conservative states opportunities to resist liberal national initiatives; now the script is flipped, with liberal states pursuing alternative paths in a time of Trump-GOP dominance. This new edition of David Brian Robertson’s incisive and comprehensive overview of U.S. federalism, therefore, could hardly be more timely. It is a clear, engaging account of how federalism influences what the U.S. does – and fails to do – about legal and social policy challenges of all stripes.

This new edition of David Brian Robertson’s text skillfully recounts important policy battles fought, in the arena of American federalism, on issues ranging from race to climate change to economic innovation. Combining scholarly insights and salient examples, Robertson reveals that neither U.S. history nor American politics can be properly understood without federalism playing a central role.

, University of Virginia No one can truly understand American government and politics without coming to grips with our particular version of federalism. David Brian Robertson offers the most trenchant treatment of the subject anywhere: He illuminates how federalism has structured the battleground for politics from the nation’s founding to the present, with consequences for policies on topics ranging from the death penalty to labor law and gun rights to climate change. In the process, he reveals how federalism organizes and channels political conflict, shapes innumerable features of citizens’ everyday lives, and provides venues for those seeking political change. This book is a tour de force.

In this excellent book, David Brian Robertson argues convincingly that federalism is integral to an understanding of American political development by combining sophisticated analysis with an accessible and engaging style. The second edition melds classic themes in federalism research with contemporary scholarship on race, economic development, politics, and public policy, making this the ideal text for graduate and advanced undergraduate courses on federalism and intergovernmental relations.

In this new edition of Federalism and the Making of America, David Brian Robertson masterfully shows that the only way to grasp fully how political conflict plays out in the United States is to understand the role of federalism. Far from a bloodless feature of constitutional design, federalism gives political adversaries an impressive array of institutional and rhetorical weapons to fight back with. Perhaps most intriguingly, the book highlights how federalism has enabled actors across the ideological spectrum both to prevent and advance significant changes in the role of government. With vivid prose and a potent mixture of historical detail and contemporary examples, this book is more than a major intellectual contribution – it is essential reading for anyone interested in American politics.

, Marquette University Federalism again takes center stage in this new edition, as David Brian Robertson skillfully unveils the often mystifying impact of federal-state relations on the origins and exercise of government authority. In this panoramic view of political development, Robertson demonstrates how the theory and practice of federalism have mutually constituted each other throughout American history. There are many lessons to be learned, not least of which is that the states have neither been bastions of reaction nor purveyors of progress.

Federalism and the Making of America