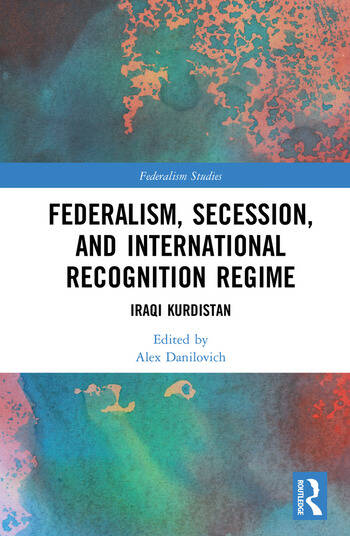 Federalism is widely believed to be an efficient tool to quell ethnic conflict, yet recently there has been a pronounced global tendency among ethnic minorities to break away from larger nations. Iraqi Kurdistan, a region within the newly established Iraqi federation, also harbors plans to proclaim its own sovereign state. This volume analyses the factors that have caused the Kurds to change their minds about living in a federal Iraq, and the reaction of their neighbors and the international community at large.

Using a broad theoretical framework of federal studies and secession theory, this book examines the causes for the breakup of ethnic federations fuelled by nationalism as well as the international regime of recognition of newly formed entities. It provides a first-hand account and theoretically informed interpretations of the Iraqi situation, showing that federalism is not always a universal remedy for ethnic and religious conflicts; it also emphasizes that the international recognition regime is a significant variable in peoples’ actions and aspirations to sovereignty.

Enriching the ongoing debate on federalism and self-determination, this volume will appeal to scholars and students of politics, international relations, and comparative politics, as well as those interested in federalism, the Middle East and Kurdistan.

CHAPTER 1 The Paradox of Federalism and the Iraqi Federation

CHAPTER 3 Together We Stand, Divided We Fall: Transcending the Obstacles to Internal Sovereignty in Iraqi Kurdistan

CHAPTER 4 From Shotgun Marriage to Amicable Divorce? The Kurdistan Region of Iraq: Self-determination, Secession and Recognition in Comparative Perspective

CHAPTER 5 KRG Survival in Iraq and in the Middle East: Non-Alignment and Sectarian Neutrality

CHAPTER 6 Kurdistan: the Strategy of Secession and International Recognition Regime

Professor Alex Danilovich was professionally trained in the USA, USSR and France, and has developed scholarly expertise in comparative politics, constitutional law and international relations. The results of his research have been summarized in many scholarly articles and several books, such as Russian-Belarusian Integration: Playing Games Behind the Kremlin Walls, Ashgate, USA/UK, 2006; Iraqi Federalism and the Kurds: Learning to Live Together, Ashgate, UK, 2014; Iraqi Kurdistan in Middle Eastern Politics, Routledge, UK, 2017.

Alex Danilovich worked as an expatriate professor and academic administrator in Iraqi Kurdistan over several years. He is a recipient of the American Political Science Association award for Outstanding Teaching in Political Science. Currently, Alex Danilovich works as a Senior Associate at the Institute on Governance, an Ottawa-based think-tank, on a project related to Iraqi federalism.