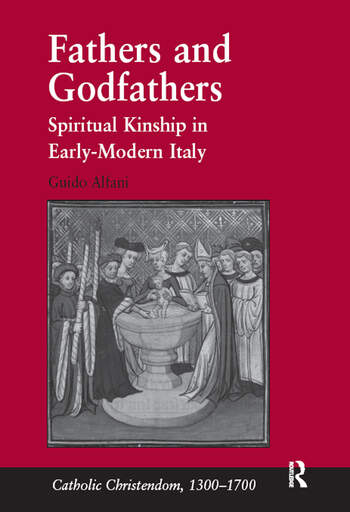 In medieval Europe baptism did not merely represent a solemn and public recognition of the 'natural' birth of a child, but was regarded as a second, 'spiritual birth', within a social group often different from the child's blood relations: a spiritual family, composed of godfathers and godmothers. By analyzing the changing theological and social nature of spiritual kinship and godparenthood between 1450 and 1650, this book explores how these medieval concepts were developed and utilised by the Catholic Church in an era of reform and challenge. It demonstrates how such ties continued to be of major social importance throughout the sixteenth and seventeenth centuries, but were often used in ways not always coherent with their original religious meaning, and which could have unexpected social consequences. In particular, the book analyzes in detail the phase of transition from the traditional model of godparenthood which allowed for multiple godparents, to the new couple model (one godfather and one godmother) imposed by Tridentine law. Drawing upon a large database of archival data taken from parish books of baptisms and marriages, pastoral visitations, diocesan statutes, synods and provincial councils, it is shown how attempts were made to resist or to compromise with the Church, thus providing a better understanding of the often contested meaning given to godparenthood by early modern society. Whilst the Church was ultimately successful in imposing its will, the book concludes that this was to have unexpected results that were to eventually weaken the role of godparents. Rather than persuading parents to choose real 'spiritual tutors' to act as godparents, the choice of godparents became increasingly influenced with social status, so that godparenthood began to resemble a pure clientele system, something it had never been before. Through this long-term exploration of Catholic spiritual kinship, much is revealed, not only about godparenthood, but about the wider social and religious networks. Comparison with Protestant reactions to the same issues provides further insight into the importance of this subject to early modern European society.

Guido Alfani is Assistant Professor of Economic History at Bocconi University, Milan, Italy. The majority of his lectures cover the subject of history and demography. He is a Fellow of the Dondena Centre for Research on Social Dynamics. From 2002-2003 he was Visiting Scholar at the Ã‰cole des Hautes Ã‰tudes en Sciences Sociales, Paris, France. In 2006 he was Visiting Research Fellow of the Royal Society of Edinburgh, Scotland. Also in 2006 he became Honorary Research Fellow of the University of Glasgow, Scotland. In 2008 he was Visiting Professor at the University of Bordeaux-3, France and also Visiting Researcher at the Centre for Population Studies, University of Umea, Sweden. He is Head of the RDB Bocconi research project 'Distribution and Concentration of Wealth in Historical Perspective'. He is also a member of the international research project 'Mobilités, Populations et Familles' (MPF). Furthermore, he is co-founder and organizer, with Vincent Gourdon, of the international scientific network 'Patrinus'.

'... Alfani's work presents a concrete, deeply researched set of data and conclusions about a particular region that will allow for fruitful comparative work in the future.' Catholic Historical Review 'Guido Alfani here offers a statistically-rich study of practices of godparenthood in early modern Europe, with an eye to comparing practices before and after the Reformation. ... The numbers are impressive, and they are crunched rigorously.' Worship