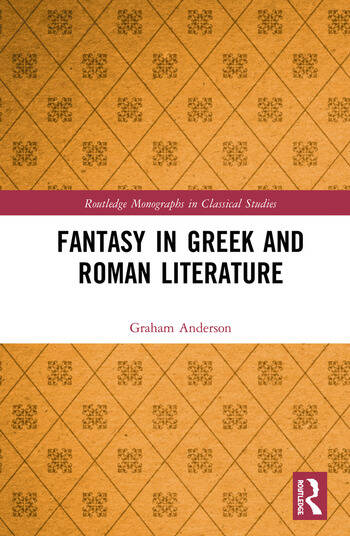 Fantasy in Greek and Roman Literature offers an overview of Greek and Roman excursions into fantasy, including imaginary voyages, dream-worlds, talking animals and similar impossibilities. This is a territory seldom explored and extends to rarely read texts such as the Aesop Romance, The Battle of the Frogs and the Mice, and The Pumpkinification of the Emperor Claudius.

Bringing this diverse material together for the first time, Anderson widens readers’ perspectives on the realm of fantasy in ancient literature, including topics such as dialogues with the dead, Utopian communities and fantastic feasts. Going beyond the more familiar world of myth, his examples range from The Golden Ass to the Late Antique Testament of a Pig. The volume also explores ancient resistance to the world of make-believe.

is an invaluable resource not only for students of classical and comparative literature, but also for modern writers on fantasy who want to explore the genre’s origins in antiquity, both in the more obvious and in lesser-known texts.

Part One: Themes of Fantasy

6 Some Fantastic Aspects of Myth

11 Inventing the Past in Homer and Philostratus

13 Getting into Heaven: Icaromenippus and Apocolocyntosis

15 Narrators and Audiences for Fantasy

16 Some Approaches, Ancient and Modern

Graham Anderson is Emeritus Professor of Classics at the University of Kent, UK. He has written extensively on ancient fiction and fantasy, including Fairytale in the Ancient World (Routledge, 2000) and Greek and Roman Folklore (2006). He has just completed an anthology of ancient fairy tales for Routledge.