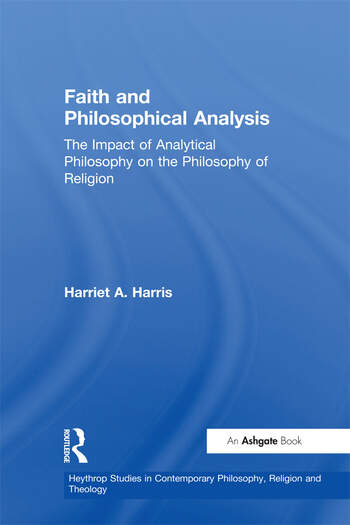 Faith and Philosophical Analysis: The Impact of Analytical Philosophy on the Philosophy of Religion

Harriet A. Harris teaches philosophy at the University of Edinburgh, UK and is the university Chaplain.

Christopher J. Insole is Professor in Philosophical Theology and Ethics at the University of Durham, UK, and Professorial Fellow at the Australian Catholic University. He has published extensively on realism and anti-realism, religious epistemology, the relationship between theology, metaphysics, and political philosophy, and on Immanuel Kant's philosophy of religion.

'In this highly stimulating collection, a range of authors take the pulse of analytical philosophy of religion.' Arsdisputandi 'All in all, Faith and Philosophical Analysis is a timely and thought-provoking collection, one that could be read with interest and benefit both by those within the discipline of the philosophy of religion, however one construes it, and by those without. Who is within and who is without will remain in dispute, a dispute which some of us will hope continues to be characterised by clarity, rigour, and common sense that pervades this volume.' Religious Studies 'Readers of this volume will gain a good sense of the chief characteristics of analytical philosophy, of its historical context and development, of its impact on the philosophy of religion and of its chief problems and limitations... these essays do much to expose the legacy of a significant aspect of our philosophical heritage.' Theology

Faith and Philosophical Analysis: The Impact of Analytical Philosophy on the Philosophy of Religion