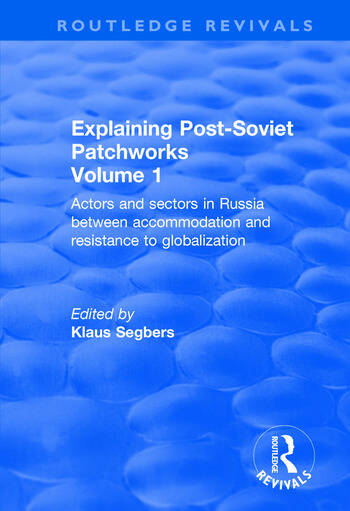 Explaining Post-Soviet Patchworks: Volume 1: Actors and Sectors in Russia Between Accommodation and Resistance to Globalization

This title was first published in 2001: Based on extensive research, this trilogy provides new insights into Post-Soviet transformations without taking refuge in the traditional assumption that Russia is unique. Using powerful analytical tools, this trilogy marks the re-integration of the Former Soviet Union (FSU) into the main current of political science. An invaluable resource for all those interested in Russia and the Post-Soviet states. This first volume focuses on state, sectoral, and transnational actors from a predominantly rational choice perspective. The book includes an extensive introduction by the editor which uses additional material gathered by the project team on two polls, 1999 and 2000, which, in addition to the individual studies, provide sufficient data to obtain unprecedented insights into the basic preferences and the logic of action of the main players in Russia. The outcomes of this research will be particularly relevant for students, researchers, journalists and decision-makers interested in Russia and the Post-Soviet states’ politics, international relations, economics, social policy and sociology.

’...valuable source for anyone interested in the politics and economy of the former "Second World".’ Business Horizons ’Th[is] book takes a significant step toward redressing the balance between internal and external factors in late and post-Soviet develoments.’ Slavic Review

Explaining Post-Soviet Patchworks: Volume 1: Actors and Sectors in Russia Between Accommodation and Resistance to Globalization