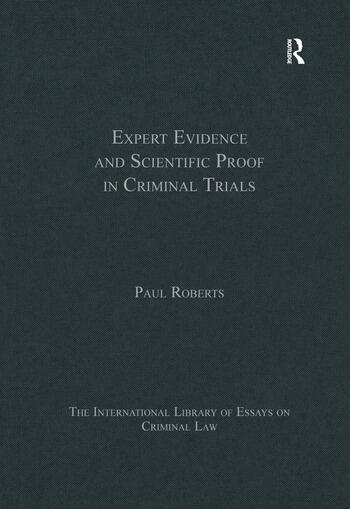 Forensic science evidence and expert witness testimony play an increasingly prominent role in modern criminal proceedings. Science produces powerful evidence of criminal offending, but has also courted controversy and sometimes contributed towards miscarriages of justice. The twenty-six articles and essays reproduced in this volume explore the theoretical foundations of modern scientific proof and critically consider the practical issues to which expert evidence gives rise in contemporary criminal trials. The essays are prefaced by a substantial new introduction which provides an overview and incisive commentary contextualising the key debates. The volume begins by placing ’forensic science’ in interdisciplinary focus, with contributions from historical, sociological, Science and Technology Studies (STS), philosophical and jurisprudential perspectives. This is followed by closer examination of the role of forensic science and other expert evidence in criminal proceedings, exposing enduring tensions and addressing recent controversies in the relationship between science and criminal law. A third set of contributions considers the practical challenges of interpreting and communicating forensic science evidence. This perennial battle continues to be fought at the intersection between the logic of scientific inference and the psychology of the fact-finder’s ’common sense’ reasoning. Finally, the volume’s fourth group of essays evaluates the (limited) success of existing procedural reforms aimed at improving the reception of expert testimony in criminal adjudication, and considers future prospects for institutional renewal - with a keen eye to comparative law models and experiences, success stories and cautionary tales.