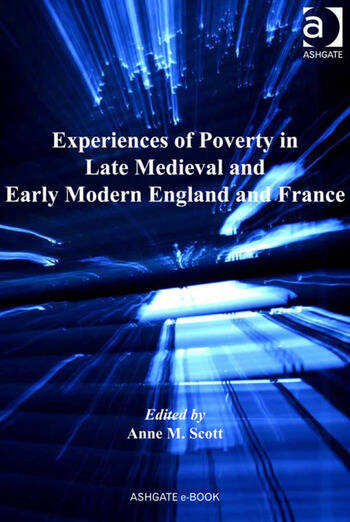 Exploring a range of poverty experiences-socioeconomic, moral and spiritual-this collection presents new research by a distinguished group of scholars working in the medieval and early modern periods. Collectively they explore both the assumptions and strategies of those in authority dealing with poverty and the ways in which the poor themselves tried to contribute to, exploit, avoid or challenge the systems for dealing with their situation. The studies demonstrate that poverty was by no means a simple phenomenon. It varied according to gender, age and geographical location; and the way it was depicted in speech, writing and visual images could as much affect how the poor experienced their poverty as how others saw and judged them. Using new sources-and adopting new approaches to known sources-the authors share insights into the management and the self-management of the poor, and search out aspects of the experience of poverty worthy of note, from which can be traced lasting influences on the continuing understanding and experience of poverty in pre-modern Europe.

Anne M. Scott was, until recently, Convenor of the Australian Research Council Network for Early European Research 2006-2010 and is currently an honorary research fellow at the University of Western Australia. Her field of research is in fourteenth-century English Literature, and she has published a monograph, Piers Plowman and the poor, Dublin: Four Courts Press, 2004, three volumes of collected essays, and several essays on fourteenth- and fifteenth-century English literature. She is Editor of Parergon, the journal of the Australian and New Zealand Association for Medieval and Early Modern Studies, now available as part of the Project MUSE database.

'Given the high quality of the writing, and with its consistent emphasis on giving identity to the poor, this book will be valuable to any reader wishing to better understand the complex texture of poverty in pre-modern England and France.' French Review 'Experiences of Poverty [...] offers important and unique contributions to the historiography... The particular value of this book is that while the authors unambiguously situate their studies within well-defined historiographical traditions, they base their own research upon previously untapped sources or re-examine known sources from a new perspective... this multi-disciplinary book is highly recommended.' Social History '... this collection of essays succeeds in outlining the complex realities and representations of poverty across a broad chronological sweep.' Sixteenth Century Journal 'This volume presents the reader with a variety of approaches to the question of how poverty was experienced and understood in England and France over several centuries. Taken together, these essays provide insight into how the poor came to be categorized as "deserving" or "undeserving." Further, the findings here show how the experience of poverty responded not only to changing material conditions, of course, but also to the changes in perceptions of the poor.' H-France