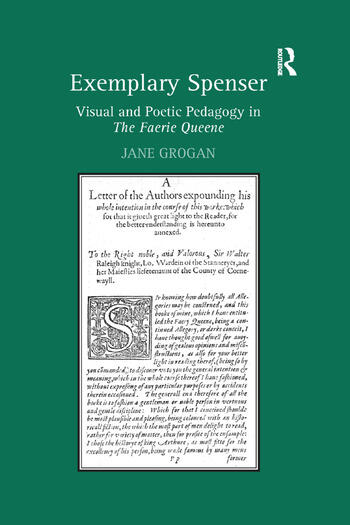 Exemplary Spenser: Visual and Poetic Pedagogy in The Faerie Queene

Exemplary Spenser analyses the didactic poetics of The Faerie Queene, renewing attention to its avowed attempt to "fashion a gentleman or noble person in vertuous and gentle discipline" and examining how Spenser mobilises his pedagogic concerns through the reading experience of the poem. Grogan's investigation shows how Spenser transacts the public life of the nation heuristically, prompting a reflective reading experience that compels engagement with other readers, other texts and other political communities. Negotiating between competing pedagogical traditions, she shows how Spenser's epic challenges the more conservative prevailing impulses of humanist pedagogy to espouse a radical didacticism capable of inventing a more active and responsible reader. To this end, Grogan examines a wide variety of Spenser's techniques and sources, including Philip Sidney's Defence of Poesy and the powerful visually-couched epistemological paradigms of early modern culture, ekphrasis among them. Importantly, Grogan examines how Spenser's didactic poetics was crucially shaped by readings of the Greek historian Xenophon's Cyropaedia, a text and influence previously overlooked by critics. Grogan concludes by reading the last book of The Faerie Queene, the Legend of Courtesy, as an attempt to reconcile his own didactic sources and poetics with the more recent tastes of his contemporaries for a courtesy theory less concerned with "vertuous and gentle discipline". Returning to the early modern reading experience, Grogan shows the sophisticated intertextual dexterity that goes into reading Spenser, where Spenserian pedagogy lies not simply in the textual body of the poem, but also in the act of reading it.

Jane Grogan was the NUI Post-Doctoral Fellow in the Humanities at the National University of Ireland, Galway from 2006-08. She has recently been appointed Lecturer in English Literature, c. 1550-1750 at University College Dublin.

Prize: Winner of the Isabel MacCaffrey Prize, 2011, awarded by the International Spenser Society '... the book is to be welcomed for its renewed emphasis on Spenser’s didacticism and his use of Xenophon. It is especially useful in drawing attention to just how many key episodes in The Faerie Queene involve sights, visions, ekphrastic descriptions, reading, misreading, and voyeurism. In doing so it also invites us as readers and critics of Spenser to dwell further upon the poem’s surface narrative before the prevailing critical currents concerned with deconstructing its political allegory compel us to consider what lies beneath.' Review of English Studies 'While her research and style of writing are equally erudite, the text occasionally demonstrates a wry humour and quirky cockiness that make for surprisingly enjoyable reading. In conclusion, one can confidently state that Spenserians who are seeking to develop greater visual and pedagogic clarity insofar as his complex epic is concerned would be well-served were they to grab a pair of Grogan's "literary bifocals" - beautifully packaged by Ashgate Press.' Early Modern Literary Studies

Exemplary Spenser: Visual and Poetic Pedagogy in The Faerie Queene