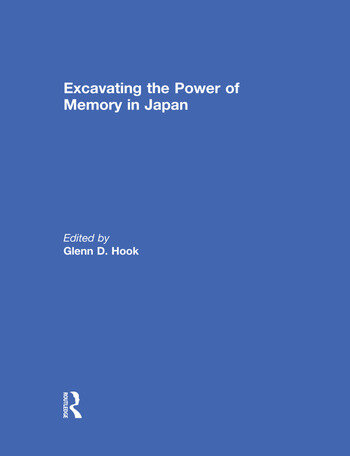 Excavating the Power of Memory in Japan

Excavating the power of memory offers a succinct examination of how memory is constructed, embedded and disseminated in contemporary Japanese society. The unique range and perspective of this collection will provide an understanding not found elsewhere. It starts with a lucid introduction of how memory plays a political and wider social role in Japan. Four case studies follow. The first takes up the divergence in memory at the national and subnational levels by analysing the memory of the battle of Okinawa and US military accidents in Okinawa prefecture, illuminating how memory in the prefecture embeds Okinawans as victims of mainland Japan and of the United States. The second explores whether Japan’s membership of the International Criminal Court represents a shift in the Japanese government’s negative remembrance of the International Military Tribunal for the Far East, demonstrating how both courts are largely portrayed as being disconnected in political debates. The third offers an analysis of the surviving letters of the Kamikaze pilots in order to interrogate and compare their presumed identity in the dominant collective memory and their own self-identities. The fourth untangles how the ‘memory of winds’ in Japanese fishing communities remains an expression of social thought that presides over the ‘transmission of meaning’ about fishermen's geographical surroundings. This book was previously published as a special issue of the Japan Forum.

1. Excavating the power of memory in Japan
Glenn D. Hook

2. The American Eagle in Okinawa: the politics of contested memory and the unfinished war
Glenn D. Hook

3. From Tokyo to The Hague: war crime tribunals and (shifting?) memory politics in Japan
Kerstin Lukner

4. Contested memories of the Kamikaze and the self-representations of Tokko-tai youth in their missives home
Luli van der Does-Ishikawa

Excavating the Power of Memory in Japan