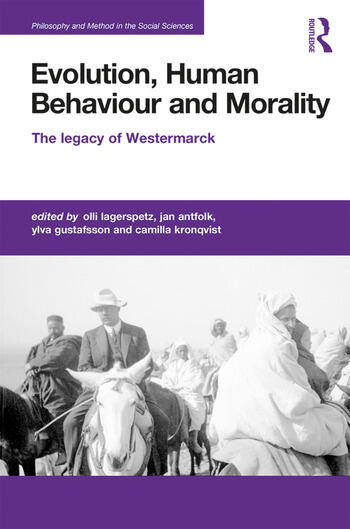 Evolution, Human Behaviour and Morality: The Legacy of Westermarck

This book highlights the recent re-emergence of Edward Westermarck's work in modern approaches to morality and altruism, examining his importance as one of the founding fathers of anthropology and as a moral relativist, who identified our moral feelings with biologically-evolved retributive emotions.

Questioning the extent to which current debates on the relationship between biology and morality are similar to those in which Westermarck himself was involved, the authors ask what can be learnt from his arguments and from the criticism that he encountered. Drawing on Westermarck's manuscripts and papers as well as his published work, the authors show the importance of situating debates, whether modern or classical, in their correct methodological and philosophical context.

This volume is a rigorous assessment of the ways in which morality is connected with human biological nature. It plays close attention to the development of debates in this field and will appeal to scholars of sociology, anthropology and philosophy.

Part 1: Westermarck and the Emergence of 20th Century Social Anthropology

3. Westermarck, Malinowski and the 'Wild Things': At the Interface between Anthropology, Sexology and Psychoanalysis (Juhani Ihanus)

4. The Sensitiveness of the Holy: Westermarck and Durkheim on Religion and Society (Olli Lagerspetz and Kirsti Suolinna)

5. Westermarck, the Evolutionists and the Question of Context (Olli Lagerspetz)

Part 2: Westermarck as a Precursor of Evolutionary Psychology

8. The Westermarck Thesis as a Thinking Tool for Sociobiology (Ullica Segerstrale)

Part 3: The Emotional Origins of Morality

10. The Evolution of Westermarck's Theory of Moral Emotions (Otto Pipatti)

11. Westermarck and Moore on the Source of Morality (Camilla Kronqvist)

14. Why Altruism May Not be the Right Concept for Understanding Morality (Ylva Gustafsson)

is Senior Lecturer in Philosophy at Åbo Akademi University, Finland. He is the author of Trust, Ethics and Human Reason and co-author of Edward Westermarck: Intellectual Networks, Philosophy and Social Anthropology.

is a postdoctoral researcher in the Department of Psychology at Åbo Akademi University, Finland.

is a postdoctoral researcher in the Department of Philosophy at Åbo Akademi University, Finland.

is a postdoctoral researcher in the Department of Philosophy at Åbo Akademi University, Finland.

'This book is an important contribution to the revival of interest in Edward Westermarck, one of the greatest but most overlooked of the classical sociologists. Most discussions of Westermarck focus on his now celebrated theory of incest avoidance, but this volume goes beyond that to consider him as a forerunner of evolutionary psychology and his Darwinian understanding of the evolution of morality. In that regard it is especially welcome.' Stephen K. Sanderson, University of California, Riverside, USA

Evolution, Human Behaviour and Morality: The Legacy of Westermarck