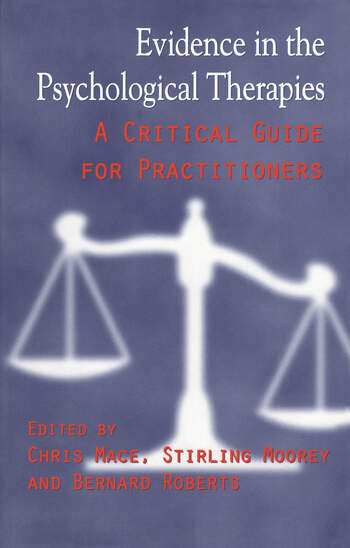 Evidence in the Psychological Therapies: A Critical Guidance for Practitioners

Evidence-based practice is likely to determine standards for publicly and insurance-funded psychotherapies in the near future. How should practitioners prepare themselves for this?
Evidence in the Psychological Therapies takes a critical look at the meaning of evidence. It examines which kinds of evidence are most relevant to psychological therapies, and Mow the quality of evidence can be assessed. The potential impact of evidence on practice is illustrated across a range of clinical settings and therapeutic models. The contributors include distinguished academics in law and philosophy, clinical researchers who have contributed to the evidence base for psychological therapies, and prominent therapists who have put research into practice and pioneered effective methods of audit.
This accessible discussion of a topic no practitioner can ignore is recommended to all psychotherapists, including psychoanalysts, CBT therapists, psychiatrists, clinical psychologists, counsellors and those in training.

Chris Mace is senior lecturer at the University of Warwick and consultant psychotherapist, Soth Warwickshire NHS Trust. Stirling Moorey is Consultant Psychiatrist in Cognitive Behaviour Therapy to the South London and Maudsley NHS Trust and Honorary Senior Lecturer at the Institute of Psychiatry. Bernard Roberts is Consultant Psychotherapist and medical director at Kingston Community NHS Trust.

Evidence in the Psychological Therapies: A Critical Guidance for Practitioners