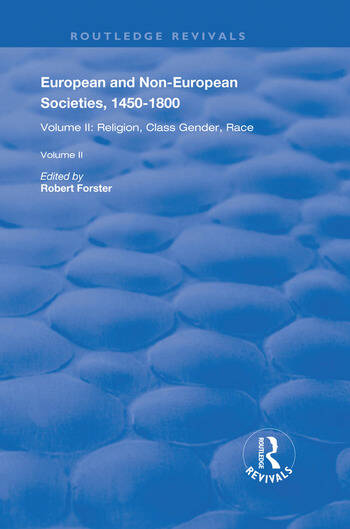 European and Non-European Societies, 1450–1800: Volume I: The Longue Durée, Eurocentrism, Encounters on the Periphery of Africa and Asia

First published in 1997, this is the first of two volumes. It looks at the process of European expansion which brought into contact societies and cultures across the world which had been initially alien to one another. Conflict, and violent conflict, was one aspect of this interaction, but accommodation, mutual adaptation, and institutional and behavioural synthesis were also present though often biased in favour of European norms. The intent of this book is to avoid treating ’colonization’, ’dominance’ and exploitation’ as the only focuses of attention. In the first volume Robert Forster explores issues of formative influences, the impact of Eurocentrism on historiography and the reaction against it, and the differing approaches and perceptions of the Europeans, notably the Spanish, French and English. In this period he distinguishes three modes of interaction: that of the trading empires, generally in Africa and Asia, where the European control of the encounter was slighter; and those of the regions of settlement, as in North America, and of exploitation, typified by the Caribbean, where the European impact was profound. The second volume focuses on the Americas, and uses the topics of religion, class, gender, and race as its points of entry.

Volume I: The Longue Durée, Eurocentrism, Encounters on the Periphery of Africa and Asia.  A. The Longue Durée. 1. Portuguese and Chinese Maritime Imperialism: Camões’s Lusiads and Luo Maodeng’s Voyage of the San Bao Eunuch. Robert Finlay. 2. Feudalism, Capitalism, and the World-System in the Perspective of Latin America and the Caribbean. Steve J. Stern. 3. Hacienda-Indian Community Relations and Indian Acculturation: An Historiographical Essay. Erwin P. Grieshaber. 4. Land, Population and the Evolution of New England Society, 1630-1790. Kenneth Lockridge. 5. Time, Space, and the Evolution of Afro-American Society on British Mainland North America. Ira Berlin. B. Eurocentrism. 6. The Ethnohistory of Early America: A Review Essay. James Axtell. 7. Early Native North American Responses to European Contact: Romantic versus Rationalistic Interpretations. Bruce G. Trigger. 8. ‘We Are Well as we Are’: An Indian Critique of Seventeenth-Century Christian Missions. James P. Ronda. 9. ‘Are These Not Also Men?’: The Indian’s Humanity and Capacity for Spanish Civilization. Patricia Seed. 10. Europeans and Amerindians: Some Comparative Aspects of Early Contact. Olive Patricia Dickason. C. Encounters on the Periphery of Africa and Asia. 11. Trade and Politics Behind the Slave Coast: The Lagoon Traffic and the Rise of Lagos, 1500-1800. Robin Law. 12. Beyond the Cape: The Portuguese Encounter with the Peoples of South Asia. Chandra Richard de Silva. 13. Peasant Survival Strategies and Rehearsals for Rebellion in Eighteenth-Century South India. Eugene F. Irschick.

European and Non-European Societies, 1450–1800: Volume I: The Longue Durée, Eurocentrism, Encounters on the Periphery of Africa and Asia