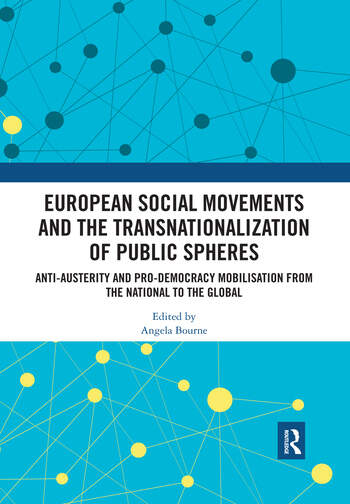 European Social Movements and the Transnationalization of Public Spheres: Anti-austerity and pro-democracy mobilisation from the national to the global

The chapters were originally published in a special issue of the Journal of Civil Society.

1. Social Movements and the Transnational Transformation of Public Spheres

2. More than a Copy Paste: The Spread of Spanish Frames and Events to Portugal

3. Beyond Nationalism? The Anti-Austerity Social Movement in Ireland: Between Domestic Constraints and Lessons from Abroad

4. National Anti-austerity Protests in a European Crisis: Comparing the Europeanizing Impact of Protest in Greece and Germany During the Eurozone Crisis

5. The Gezi Protests and the Europeanization of the Turkish Public Sphere

7. Essay: Rethinking Global Civil Society and the Public Sphere in the Age of Pro-democracy Movements

Conclusion: Social Activism Against Austerity – The Conditions for Participatory and Deliberative Forms of Democracy

Angela Bourne is associate professor at Roskilde University, Denmark. She researches on EU and comparative politics, transnational mobilisation of social movements, responses to extremism and the proscription of political parties. She has published in European Journal of Political Research, Democratization, European Constitutional Law Review and Journal of Common Market Studies.

European Social Movements and the Transnationalization of Public Spheres: Anti-austerity and pro-democracy mobilisation from the national to the global