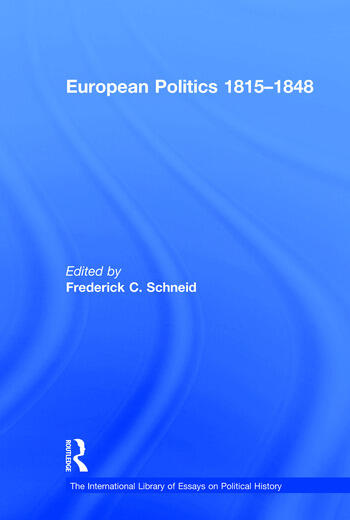 The three intervening decades between the Congress of Vienna and the Revolutions of 1848 are marked by enormous social, political, economic and cultural change. Liberalism, nationalism, romanticism and industrialism profoundly affected the course of Europe and compelled conservative monarchies to accept the principles of collective action and military force to curb political revolution. In the years immediately following 1815, the Quadruple and Holy Alliances served the dual purpose of preventing a restoration of Bonapartism and suppressing revolutions. By the 1820s these international associations dissipated, but the principles upon which they were founded informed the decisions of the respective governments through 1848. The classic articles and papers collected in this volume attempt to illustrate that despite the substantial changes to European society which occurred during these thirty years, European powers accepted common principles which influenced their state's domestic and foreign policies.

Contents: Introduction; Part I The Congress of Vienna and the Concert of Europe: Did the Vienna System rest on a balance of power?, Paul W. Schroeder; A political science perspective on the balance of power and the concert, Robert Jervis; Metternich, Italy and the Congress of Verona, 1821-1822, Alan Reinerman. Part II The Eastern Question: The first Serbian uprising (1804-1813) and the 19th-century origins of the Eastern Question, Lawrence P. Meriage; Nationalism in the Danubian principalities, 1800-1825 - a reconsideration, George F. Jewsbury; The Adrianople Treaty (1829) and its European implications, Nicolae Ciachir; The Greek revolution and the Anglo-French entente 1843-1844, David McLean; Mehemet Ali's expedition to the Persian Gulf, 1837-1840, J.B. Kelly. Part III The German Question: From Rheinbund to Deutscher Bund: the road to European equilibrium, Enno E. Kraehe; Violence between civilians and state authorities in the Prussian Rhineland, 1830-1846, James M. Brophy; Prussian aims for the Zollverein, 1828-1833, David T. Murphy; The German Zollverein and the European Economic Community, W.O. Henderson; Metternich and the July revolution, Fritz L. Hoffman; The war scare of 1831 and the Prussian-South German plans for the end of Austrian dominance in Germany, Robert D. Billinger Jr. Part IV Italy, Spain and Latin America: Realpolitik and conviction in the conflict between Piedmont and the Papacy during the Risorgimento, Frank J. Coppa; France and the problem of intervention in Spain, 1834-1836, Roger Bullen; Spain and the Latin American wars of independence: the free trade controversy, 1810-1820, Michael P. Costeloe; French policy in Spanish America, 1830-1848, Iwan Morgan; Name index.