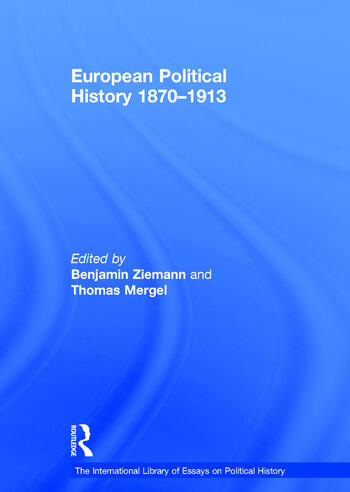 The period from 1870 to 1913 saw the emergence of modern mass politics. The extension of the franchise, the development of party structures and political cleavages and growing state intervention mark this period as one of substantial political change. This collection brings together a selection of the most important recent research in this field.

Contents: Part I The Emergence of Mass Politics: Giolitti's reform program. An exercise in equilibrium politics, SÃ¡ndor AgÃ³cs; The struggle for women's suffrage in Norway 1855-1913, Ida Blom; Popular Boulangism and the advent of mass politics in France, 1886-90, Patrick H. Hutton; The franchise factor in the rise of the Labour Party, H.C.G. Matthew, R.I. McKibbin and J.A. Kay; The zemstvo and public initiative in late Imperial Russia, Thomas Porter and William Gleason. Part II Parties and Political Cleavages: The kulturkampf and the course of German history, Margaret Lavinia Anderson; Qui Ã§a, Dreyfus? The affair in rural France, Michael Burns; The regenerationist movement in Spain after the disaster of 1898, Joseph Harrison; Class and gender in the making of urban Toryism, 1880-1914, Jon Lawrence; An old church and a new state: Italian anticlericalism 1876-1915, Adrian Lyttelton; Antisemitism as a cultural code: reflections on the history and historiography of antisemitism in Imperial Germany, Shulamit Volkov. Part III National Integration, Nationalist Politics and the State: Symbols of Irish nationalism, Peter Alter; Peasants into Frenchmen? The case of the Flemish in the North of France 1860-1914, T.P Baycroft; 'Casting their gaze more broadly': women's patriotic activism in Imperial Germany, Roger Chickering; Nationalism as reflected in the textbooks of the South Slavs in the 19th century, Charles Jelavich; The faces of anarchy: Lombroso and the politics of criminal science in post-unification Italy, Daniel Pick; The working class and state 'welfare' in Britain 1880-1914, Pat Thane. Part IV Political Elites and Institutions: New legislatures: Germany 1871-1914, David Blackbourn; Jews in German liberal politics: Prague 1880-1914, Gary B. Cohen; Protests from behind the grille: gender and the transformation of Parliament 1867-1918, Claire Eustance; The Italian senate in the era of Giolitti and the House of Lords: some comparative insights, Fran

'All in all the editors provide a knowledgeable and focused introduction into the research on European political and social history up till the First World War... As a tool for undergraduate teaching, and particularly as a reference work of crucial English-language contributions to newer trends in political history, this volume is beneficial.' Der Staat