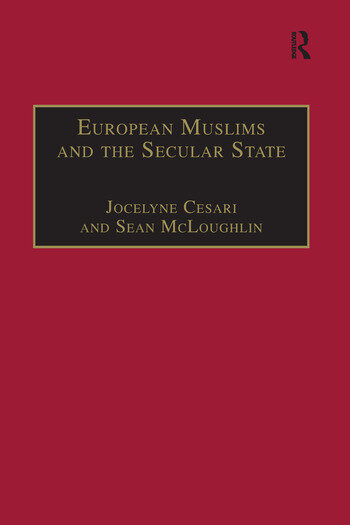 European Muslims and the Secular State

The institutionalization of Islam in the West continues to raise many questions for a range of different constituencies. Secularization represents much more than the legal separation of politics and religion in Europe; for important segments of European societies, it has become the cultural norm. Therefore, Muslims' settlement and their claims for the public recognition of Islam have often been perceived as a threat. This volume explores current interactions between Muslims and the more or less secularized public spaces of several European states, assessing the challenges such interactions imply for both Muslims and the societies in which they now live. Divided into three parts, it examines the impact of State-Church relations, 'Islamophobia' and 'the war on terrorism', evaluates the engagement of Muslim leaders with the State and civil society, and reflects on both individual and collective transformations of Muslim religiosity.

Contents: Preface, SeÃ¡n McLoughlin; Introduction, Jocelyne Cesari. Secularity in Europe and the Institutionalization of Islam: Legal Regulation and Political Recognition: The secularity of the state and the shaping of Muslim representative organizations in Western Europe, Silvio Ferrari; Discrimination and claims for equal rights amongst Muslims in Europe, Valérie Amiraux; Islam, secularism and multiculturalism after 9/11: a transatlantic comparison, Jocelyne Cesari. The State, Civil Society and Muslim Leaderships: Contested Representations of Islam in Europe: The State, 'new' Muslim leaderships and Islam as a 'resource' for public engagement in Britain, SeÃ¡n McLoughlin; Religious authorities or political actors? the Muslim leaders of the French representative body of Islam, Alexandre Caeiro; Interests, identities, and the public sphere: representing Islam in the Netherlands since the 1980s, Thijl Sunier; New modes of social interaction in Italy: Muslim leaders and local society in Tuscany and Venetia, Chantal Saint-Blancat and Fabio Perocco; From 'foreign workers' to 'sleepers': the Churches, the State and Germany's discovery of its Muslim population, Gerdien Jonker. Practising Islam in secular contexts: authority, religiosity and identity: Migration and the religiosity of Muslim women in Spain, Gema MartÃ­n-MuÃ±oz and Ana LÃ³pez-Sala; Individualizing faith, individualizing identity: Islam and young Muslim women in Belgium, Nadia Fadil; The quest for authenticity: Islamization amongst Muslim youth in Norway, Christine Jacobson; The transformation of a Sufi order into a lay community: the SÃ¼leymanci movement in Germany and beyond, Gerdien Jonker; Locating the British Imam: the Deobandi 'Ulama between contested authority and public policy post 9/11, Jonathan Birt; Index.

Jocelyne Cesari is based at the CNRS-Paris, France and Harvard University, USA. Sean McLoughlin is based at the University of Leeds, UK. Cesari was co-ordinator, and McLoughlin a member, of The Network of Comparative Research on Islam and Muslims in Europe, based at GSRL, Le Groupe de Sociologie des Religions et de la Cité, a CNRS (http://www.cnrs.fr/) Research Institute on issues of religions and secularism.

'The place of Muslims in Europe has never been more topical. Hence the need for measured and careful accounts of both the institutional context and the actors involved in different parts of Europe. This collection offers both, providing much needed background to current debate.' Grace Davie, University of Exeter, UK 'This welcome collection provides fresh and invaluable insights into some of the foremost issues surrounding Muslims in contemporary Europe.' Professor Steven Vertovec, University of Oxford, UK

European Muslims and the Secular State