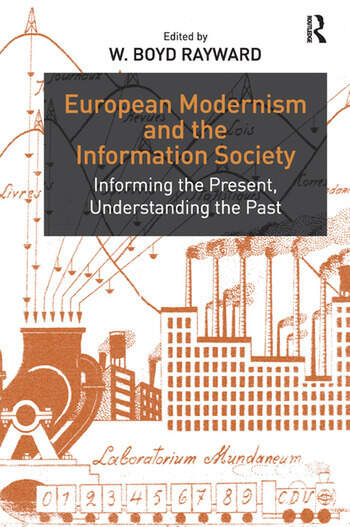 European Modernism and the Information Society: Informing the Present, Understanding the Past

Uniting a team of international and interdisciplinary scholars, this volume considers the views of early twentieth-century European thinkers on the creation, dissemination and management of publicly available information. Interdisciplinary in perspective, the volume reflects the nature of the thinkers discussed, including Otto Neurath, Patrick Geddes, the English Fabians, Paul Otlet, Wilhelm Ostwald and H. G. Wells. The work also charts the interest since the latter part of the nineteenth century in finding new ways to think about and to manage the growing body of available information in order to achieve aims such as the advancement of Western civilization, the alleviation of inequalities across classes and countries, and the promotion of peaceful coexistence between nations. In doing so, the contributors provide a novel historical context for assessing widely-held assumptions about today's globalized, 'post modern' information society. This volume will interest all who are curious about the creation of a modern networked information society.

Contents: European modernism and the information society: conceptual interdependence: introduction, W. Boyd Rayward; Understanding the information domain: the uneasy relations between sociology and cultural studies and the peculiar absence of history, Frank Webster; On the cultural and intellectual context of European documentation in the early 20th century, Michael Buckland; A tale of 2 narratives: prolegomena to an alternative history of library and information science, Steve Fuller; The role of facts in Paul Otlet's modernist project of documentation, Bernd Frohmann; Ferdinand van der Haeghen's shadow on Otlet: European resistance to the Americanized modernism of the Office International de Bibliographie, Pieter Uyttenhove and Sylvia van Peteghem; Towers and globes: architectural and epistemological differences between Patrick Geddes's outlook towers and Paul Otlet's mundaneums, Pierre Chabard; Building society, constructing knowledge, weaving the web: Otlet's visualizations of a global information society and his concept of a universal civilization, Charles van den Heuvel; ' A necessity of our time': documents and culture in Suzanne Briet's Qu'est-ce que la documentation?, Ronald E. Day; Networking knowledge before the information society: the Manchester Central Library (1934) and the metaphysical-professional philosophy of L.S. Jast, Alistair Black; Documentation and Utopia: Fabian anticipations of the information society, Alistair S. Duff; Public science in Britain and the origins of documentation and information science, 1890-1950, Dave Muddiman; The march of the modern and the reconstitution of the world's knowledge apparatus: H.G. Wells, encylopedism and the world brain, W. Boyd Rayward; The modern museum in the age of its mechanical reproducibility: Otto Neurath and the Museum of Society and Economy in Vienna, Nader Vossoughian; Gesellschaft und Wirtschaft: an encyclopedia in Otto Neurath's pictorial statistics from 1930, Sybilla Nikolow; Visualizing so

W. Boyd Rayward is Professor in the Graduate School of Library and Information Science at the University of Illinois at Urbana-Champaign, USA.

'These essays illuminate a little-known yet fascinating world of documentalists, librarians, scientists, communications experts, and utopian dreamers, who pioneered a new understanding of information integral to European modernism. With its rich historical perspective, this book offers a powerful corrective to the idea that the information society is a recent phenomenon.' Kathy Peiss, University of Pennsylvania, USA 'This spectacular collection - erudite, original, playful - explores the development of the vast information machines which were imagined or deployed as our information society developed. Its readers will come away with new understandings of the nature of information and of the project of modernism.' Geoffrey C. Bowker, Santa Clara University, USA 'This is a scholarly consideration of the interplay between modernity in the period from the end of the 19th century until the mid-20th century and the information society...this book will be of great interest to anyone interested in the history and origins of library and information management, and it provides a real insight into the development of the different occupational specialities.' The Australian Library Journal 'This work is a dense and eclectic collection of articles, well edited and chosen by eminent American LIS director, Professor W. Boyd Rayward, to illuminate and explain the interlocking concepts of moderinsation and modernism and their pervasive effects upon information generally' New Library World 'This is a most interesting collection of papers that would appeal to those who wish to learn about the history of the information society as we in librarianship see it.' Library Management

European Modernism and the Information Society: Informing the Present, Understanding the Past