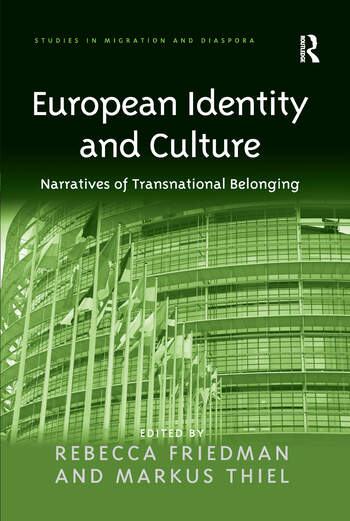 As the EU continues its integration process, the concepts of culture and transnational European belonging remain ambivalent, whether in the realm of socio-historical representation or mass politics. Engaging with recent scholarly debates surrounding the formation of collective transnational identities, this collection draws on the latest empirical case studies to explore the meaning and composition of European identity, the mechanisms that create and shape it and the question of whom it includes. Each author pays close attention to the cultural aspects of identity formation, whether manifested in official, institutional articulations, such as symbols, coinage, ceremonies and discursive manifestations, or in the cultures of the everyday, such as through new forms of communication networks, consumption or leisure. Exploring attempts by various actors - institutions, groups, individuals - to create transnational European identities, European Identity and Culture scrutinizes the cultural formations that have either reignited or emerged in often contradictory relations to the EU project, including local, regional and transnational allegiances. A rich, interdisciplinary investigation of the role of culture in the formation of European identity, whether as a central building block to unity or as a formidable obstacle to a common sense of purpose, this book will be of interest to scholars across the social sciences and humanities working on questions of political culture, European integration, citizenship and (trans-) national identity.

Rebecca Friedman is an Associate Professor of History and Co-Director of the Miami-Florida European Union Center of Excellence (MEUCE) at Florida International University. She is author of Masculinity, Autocracy and the Russian University and co-editor of Russian Masculinities in History and Culture. Markus Thiel is Assistant Professor in the Department of Politics and International Relations at Florida International University. He is author of The limits of Transnationalism in the EU and co-editor of both Diversity in the European Union and Identity Politics in the Age of Globalization.

'An inspiring and welcome new addition to the literature on European identity and culture by a distinguished group of interdisciplinary scholars. All authors engage with the question of transnational European belonging and European integration in a series of empirical case studies, making the volume as a whole an interconnecting exploration of the different processes and practices of cultural identity formation.' Ulrike Hanna Meinhof, University of Southampton, UK 'A valuable addition to the debate about European identity, filling in many of the gaps in the meaning of the term. The contributors come from multiple disciplinary perspectives and offer new insights into the formation and manifestation of European identity, with a particularly useful emphasis on the too-often overlooked role of political culture.' John McCormick, Indiana University, USA '... a very timely volume. It brings together academics from a variety of humanity and social science backgrounds to challenge our understanding of identity and its formation. Throughout, an emphasis is placed upon the cultural aspects of identity formation. The book’s main conceptual contribution lies in its advancement of the processural� character of transnational identity formation. Unlike much of the literature before it, which is still wedded to a predominantly statist as well as static paradigm� (p.2), this volume’s authors present a more dynamic conception of transnational identity, one which is in flux and changing over time. In doing so, the authors set out to elucidate some of the more subtle, shifting dynamics that evade quantitative static analyses� of identity formation (p.3). They have certainly achieved their aim... These findings ought to be read by anyone thinking about how a truly transnational European public sphere might be developed... While there are no simple answers to Europe’s identity crisis, I would thoroughly recommend this book to those brave enough to take up the chall