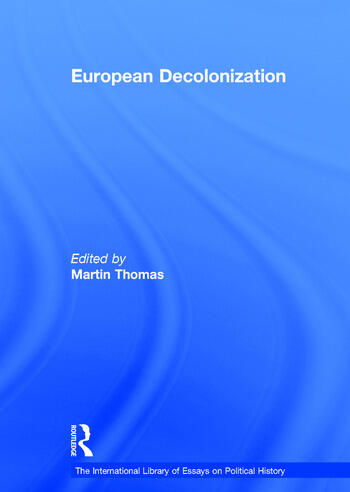 This collection brings together twenty-one key articles that explore the nature and impact of colonial withdrawal. Ranging across all the European colonial powers, the articles discuss various aspects of decolonization, including the role of political violence, changing popular attitudes to empire and the inter-actions between colonial conflict and Cold War.

Contents: Series preface; Introduction; Part I Long-Term Perspectives: A comparative study of French and British decolonization, Tony Smith; Imperial hangovers: Belgium - the economics of decolonisation, Jean-Philippe Peemans; Fanon and Cabral: a contrast in theories of revolution for Africa, Robert Blackley; British decolonisation since 1945: a pattern or a puzzle?, John Darwin. Part II Post-War Problems and Confrontations: Militant response: the Dutch use of military force and the decolonization of the Dutch East Indies, 1945-50, Petra M.H. Groen; 'Our strike': equality, anticolonial politics and the 1947-48 railway strike in French West Africa, Frederick Cooper; Planned decolonization and its failure in British Africa, John Flint; Keeping India in the Commonwealth: British political and military aims, 1947-49, Anita Inder Singh. Part III Decolonization and Party Politics: Africa and the Labour government, 1945-51, Ronald Hyam; The colonial policies of the Mouvement Républicaine Populaire, 1944-45: from reform to reaction, Martin Thomas; Keeping change within bounds: aspects of colonial policy during the Churchill and Eden governments 1951-57, David Goldsworthy; Macmillan and the wind of change in Africa, 1957-60, Ritchie Ovendale. Part IV Decolonisation, Counter-Insurgency and Wars of Liberation: 'Iron claws on Malaya': the historiography of the Malayan Emergency, Karl Hack; Decolonisation, the colonial state and chieftaincy in the Gold Coast, Richard C. Crook; School wars: church, state and the death of the Congo, Patrick M. Boyle; People's war, state formation and revolution in Africa: a comparative analysis of Mozambique, Guinea-Bissau and Angola, Patrick Chabal. Part V The Internationalization of Decolonization: China and the 1st Indochina war, 1950-54, Chen Jian; American attitudes toward decolonization in Africa, Steven Metz; Rethinking the cold war and decolonization: the grand strategy of the Algerian war for independence, Matthew Conne

Dr Martin Thomas is Reader in Colonial History and Director of the Centre for the Study of War, State and Society at the University of Exeter, UK. He has written widely on the French Empire, colonial policing and European decolonization.

'...this is an excellent starting point for students of European decolonisation. Because it addresses most of the important arguments within the subject's historiography, this volume would be a useful addition to any university library.' Historia: Journal of the Historical Association of South Africa