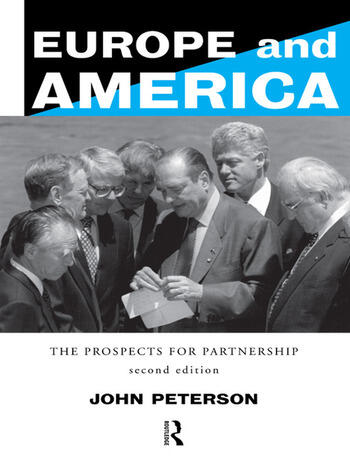 Europe and America: The Prospects for Partnership

The conflict in Bosnia, disputes within the new World Trade Organizatiion and debates about NATO enlargement all illustrate a single point: no relationship is more important in determining the state of international relations than the alliance between Europe and America. Contrary to accepted wisdom, John Peterson argues that the end of the Cold War actually enhances the prospects for partnership between the United States and the European Union. Completely updated, this book offers a clear and penetrating analysis of the problems and opportunities facing the transatlantic alliance.

John Peterson is Jean Monnet Senior Lecturer at the University of Glasgow, UK and Visting Research Fellow at the Centre for European Policy Studies, Brussels, Belgium. He has previously taught at the universities of Oxford, Essex and York in the UK, at the Insitute d'Etudes Politiques in Grenoble, France, and at the university of California, Santa Barbara.

`John Peterson's book contains a well-informed, original and eloquent analysis of EC-EU relations. Europe and America is a "must" for those readers who want to look ahead and go beyond the traditional presentation of transatlantic relations.' - Youri Devuyst, Free University Brussels

`A valuable book, as it provides a concise and lucid account of the evolution of the EC-US relationship in the context of an uncertain post-Cold War world.' - Totis Kotsonis, Millennium

`Logical and well balanced in construction. Comprehensive and meticulous in its cross-referencing and handling of sources, timely and thought-provoking in its discussion.' - Sir Leslie Fielding, Journal of Common Market Studies

`John Peterson has produced a well-argued assessment of the problem. It should stimulate students to think critically about the issues, and provoke all of us... to think further about the wider implications of a much discussed subject.' - Roger Morgan, International Affairs

`Peterson is especially strong on the impact of domestic politics, and particularly on US politics in historical perspective; he produces telling evaluations of the impact of poat-Cold Wasr changes in both Europe and the USA.' - Michael Smith, West European Politics

Europe and America: The Prospects for Partnership