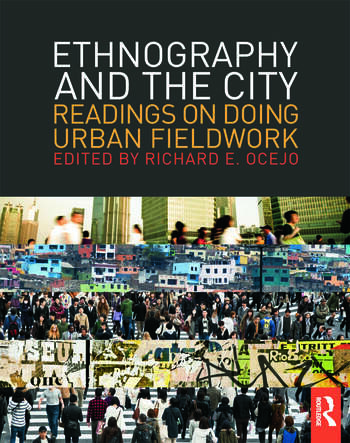 Ethnography and the City: Readings on Doing Urban Fieldwork

The only collection of its kind on the market, this reader gathers the work of some of the most esteemed urban ethnographers in sociology and anthropology. Broken down into sections that cover key aspects of ethnographic research, Ethnography and the City will expose readers to important works in the field, while also guiding students to the study of method as they embark on their own work.

Section I: Being There, Up Close

From his classic work The Urban Villagers, in this selection Herbert Gans analyzes how an Italian-American community reacts to impending displacement. By living in their Boston neighborhood Gans discovers how the primacy of the family and peer group in the lives of these working-class and the "urban village" community that they constructed influences their inaction against their displacement and the destruction of their neighborhood.

This piece showcases how Philippe Bourgois immerses himself in East Harlem ("El Barrio") to understand the daily struggles and hardships of families and children in this dangerous and unstable environment. From living in the neighborhood and having a young son, Bourgois learns both the important role that children play among residents, as well as the harsh realities that they and their mothers face.

In this selection Richard Lloyd takes us inside the gentrifying Chicago neighborhood of Wicker Park to show how a bohemian aesthetic and work ethic gets contested within and integrated into a commercial nightlife scene. By living in Wicker Park and participating in its arts scene, Lloyd discovers the importance of leisure spaces in its construction and in transforming it into a postindustrial neighborhood of cultural production.

Seeing herself as a gentrifier in North Kenwood-Oakland, Mary Pattillo examines the intra-racial conflicts between newcomers and existing residents that emerge in a neighborhood experiencing "black gentrification." As one of the newcomers against whom working-class residents demonstrated wariness and hostility, her work demonstrates the difficulties ethnographers face in immersing themselves in their field sites.

This piece pushes the community study beyond the boundaries of the urban neighborhood as Gina Perez goes to Humboldt Park in Chicago as well as San Sebastian in Puerto Rico to examine the transnational lives and identities of Puerto Rican migrants. An example of "multi-sited ethnography," Perez’s study highlights the importance of immersion across spatial boundaries to experience and understand the impact of social contexts and spatial and cultural distance on people’s lives.

Section II: Being on the Job

Along with his extensive observations of vendors, Mitchell Duneier also gets behind the table to see the sidewalk from their perspective. In this selection he demonstrates the complex relationship between the police and the vendors when he creates a situation through which an officer confronts him.

Peter Moskos in this study goes through the Baltimore police academy and becomes an officer for a year. He provides a firsthand account of the varying perspectives and interpretations of their duties and decisions that officers make while policing in the inner city.

In this study David Grazian discovers the multiple interpretations that different actors have of "authenticity" in blues clubs. This piece shows how he uses his own musical abilities on the saxophone to reveal how a community of blues club regulars construct notions of authenticity and socialize people into the group.

As Jonathan Wynn shows, walking tour guides use storytelling tricks to weave imaginative urban narratives for their participants that parallel some of the tricks that sociologists use in their own work. By becoming a tour guide, Wynn also demonstrates the value of taking the role of the other in terms of validating claims.

The boxing gym is often seen as a male domain, but Lucia Trimbur does not just enter it as a female ethnographer, she also enters the ring and to experience the rigors behind the craft of boxing as well as the duties of trainers. This piece focuses on the conflicting discourses that trainers use to coach their amateur fighters inside and outside of the ring.

By exploring a unique field site, Courtney Bender examines how people talk about religion and act religiously outside of typical settings like places of worship and the home. When she becomes a volunteer and working in the kitchen at the charity God’s Love We Deliver, Bender enters into an ongoing conversation filled with subtle but meaningful religious themes, which allows her to both collect and generate data on the role of religion in everyday talk.

In the selection from this classic example of participant observation research, William Foote Whyte discusses the importance of bowling scores for social prestige within the Italian gang, including what happens when he out-bowls its members. Whyte’s account reveals both the importance of overcoming social boundaries as well as their abiding salience.

In Tally’s Corner, Elliot Liebow navigates numerous social boundaries to provide an in-depth analysis of the social world of black streetcorner men. In this selection he discovers the meanings the men construct for their work opportunities and the importance of peer groups in their lives. His "chain-link fence" metaphor for the ethnographer-participant relationship endures as a characterization of the limits of immersion.

Race is a significant social barrier for ethnographers to navigate, and in this study Carol Stack, a white anthropologist, enters into and contributes to an inner city African-American kinship network to reveal the importance of non-blood kin relations for impoverished families. Her identity as a mother with a young son aids her in overcoming social distance and forming a close relationship with her main informant.

Ethnographers are trained to analyze the thoughts and perceptions that their participants have about their own lives, but rarely do they consider the thoughts and perceptions their participants have about them. In this piece Sudhir Venkatesh discovers that the "hustle" principle that permeates life in the Chicago housing project he studies is also applied to him and his fieldwork by its residents. Such reflection casts a critical lens on the ethnographer’s role in the field at the same time as it aids him in his own analysis.

Along with race, gender is often another important social boundary between ethnographers and their participants. In this study from the 1960s, Sherri Cavan examines gender relations in pickup nightspots. She often uses her gender to position herself in the world of male-dominated bars and analyze how social interaction between men and women works in them.

In this co-authored study on the people in an impoverished and highly contaminated shantytown and their reactions to their hazardous surrounding conditions, Javier Auyero and Debora Swistun use the "photo-elicitation" method with the town’s children to learn how they understand their environment. Through this method they overcome the age gap that exists between them while remaining sensitive to the vulnerability of their population.

This controversial work by Laud Humphreys is among the most mentioned works in courses and textbooks that discuss ethics in sociological research. This selection showcases the actual data that Humphreys gathered and the analysis he conducted on impersonal homosexual sex in public places.

It is not uncommon for ethnographers to engage in illegal activities with their participants, and in this piece Jeff Ferrell joins a group of graffiti writers in Denver as they reveal the importance of style in constructing their subcultural community. Ferrell argues that he engaged in illegal activities with his participants to experience their world and validate their claims, but places limits on doing so for all activities.

In this work, Randol Contreras deals with a number of ethical issues from studying drug robbers who regularly engage in violent acts. In this piece he focuses on their mistreatment and exploitation of women in their robberies. Contreras’s work exemplifies situations when participants engage in behaviors that fieldworkers are morally against.

Richard E. Ocejo is Assistant Professor of Sociology at John Jay College of Criminal Justice of the City University of New York (CUNY), where he teaches research methods and urban sociology. His research uses ethnographic methods to analyze urban and community issues, culture, public space, and work in the contemporary city.

Ethnography and the City: Readings on Doing Urban Fieldwork