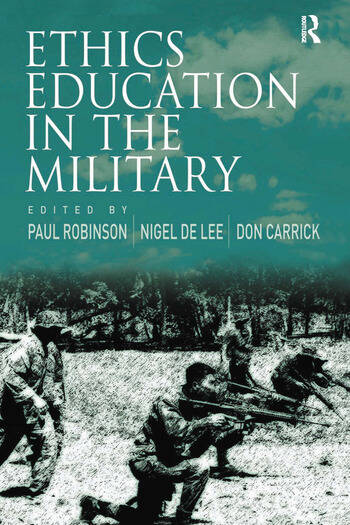 Ethics Education in the Military

With formal ethics education programmes being a rarity in most countries' armed forces, there is a growing importance for servicemen to undergo additional military ethics training. But how do we ensure that soldiers learn the right lessons from it? Furthermore, how can we achieve a uniformity of approach? The current lack of uniformity about what constitutes ethical behaviour and how troops should be educated in it is potentially a cause for serious alarm. This book advances knowledge and understanding of the issues associated with this subject by bringing together experts from around the world to analyze the content, mode of instruction, theoretical underpinnings, and the effect of cultural and national differences within current ethics programmes. It also explores whether such programmes are best run by military officers, chaplains or academic philosophers, and reflects whether it is feasible to develop common principles and approaches for the armed forces of all Western countries. This is an invaluable volume for military academies and staff colleges to enhance understanding of a matter which requires much further thought and which is becoming a vital force in influencing outcomes on the battlefields of the twenty-first century. The book will primarily be of interest to military officers and others directly involved in ethics education in the military, as well as to philosophers and students of military affairs.

'Readers will find this an engaging and worthwhile survey and evaluation of the state of moral education in the world's military services to date, and will be both informed and reassured by the open, wide-ranging, and self-critical stances adopted in the majority of these military organizations to the task of developing both good soldiers and sailors.' George R. Lucas Jr, US Naval Academy (Annapolis), USA ’Ethics Education in the Military is a long overdue volume that will rapidly become required reading for those who deliver such programmes or are simply interested in the ethical foundations of the military profession. The book offers a fascinating and diverse collection of case studies framed by provocative analyses that cut to the heart of the contemporary debates.' Stuart Gordon, Royal Military Academy, Sandhurst, UK 'An impressive work that seeks to understand and eventually improve the way that ethical education is provided for military personnel around the world. It does not make the mistake of focusing narrowly on the provision of Law of Armed Conflict training, but instead successfully engages with the values and ideas that underpin such rules, and the way that these are, and should be, taught.' David Whetham, King's College London, Defence Studies Department at the Joint Services Command and Staff College, Defence Academy of the UK 'This is a stimulating invitation to discussion of the history, organization, purpose and potential of military training academies worldwide, and a reminder of an important channel by which ethics come to shape and limit conflict...The studies themselves are full of valuable details...' Ethics and International Affairs 'This important volume, the first of its kind, comprises essays from ten democratic states on the subject of teaching ethics to the military...It was an excellent idea to include in this volume a table of military values and virtues drawn up by foreign armies and the individual British Services.' The Br

Ethics Education in the Military