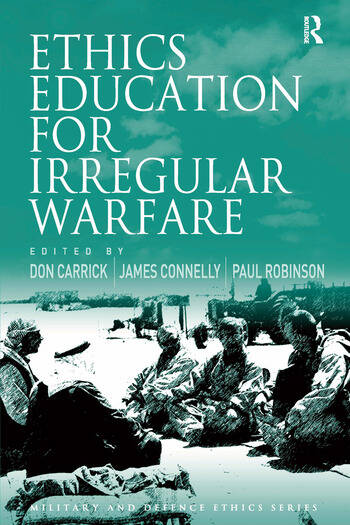 Following on from Ethics Education in the Military (eds. Paul Robinson, Nigel de Lee and Don Carrick: Ashgate 2008) which surveyed and critically analyzed the existing theory and practice of educating soldiers, sailors and airmen in the ethics of 'old fashioned' warfaring, this volume considers the extent to which such theory and practice is adequate to prepare members of the military to meet the more complex ethical challenges faced when engaging in irregular warfare in the 21st century. In recent years, events in Iraq and Afghanistan have highlighted the requirement that Western military personnel, drawn from the armed forces of many different countries, should behave in an ethical manner at all times. The contributors to this volume come from various disciplinary backgrounds, several are serving or former military officers and most are actively engaged in ethics education. The volume advances theoretical understanding of different approaches to ethics education and provides practical conclusions.

'How we are to prepare soldiers for the ethical challenges of irregular war is a topic of critical importance. The authors in this timely new book do a first-rate job in teasing out the complex and interconnected issues involved, as well as providing practical lessons gleaned from the experience of diverse militaries and training regimes.' David Rodin, Oxford Institute for Ethics, Law and Armed Conflict, UK 'This fine anthology both reflects and builds upon a series of sophisticated and fruitful conversations that have occurred recently among ethicists at military institutions in several different countries. The editors have assembled an excellent set of essays on non-conventional uses of military personnel, the ambiguous ethical challenges that often emerge in those contexts, and appropriate pedagogical strategies for militaries to employ in tackling such challenges.' David L. Perry, Davidson College, USA and formerly at the US Army War College, USA 'Nowhere is the potential for unethical and illegal actions by armed forces greater than in irregular warfare, however the term is defined. Many reasons for this are canvassed in this collection of essays...This volume is commended as one that will stimulate thinking about how to build on what has already been achieved.' Australian Defence Force Journal