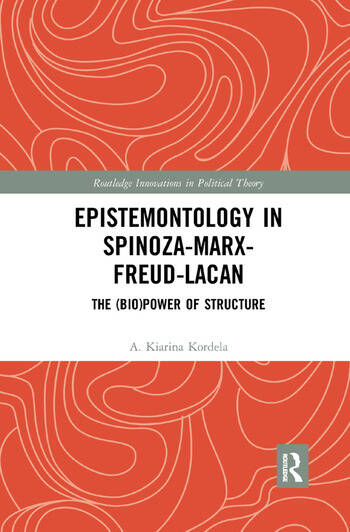 A. Kiarina Kordela steps beyond extant commentaries on Marx’s theory of commodity fetishism—from A. Sohn-Rethel to L. Althusser, É. Balibar, Slavoj Žižek, and others—to show that in capitalism value is the manifestation of the homology between thought and being, while their other aspect—power—is foreclosed and becomes the object of biopower.

Using monistic Marxian/Lacanian structuralism as an alternative to dominant models from Plato and Kant to phenomenological accounts, deconstruction, and other contemporary approaches, Kordela expertly argues that Marx’s theory of commodity fetishism is a reformulation of the Spinozian thesis that thought (mind) and things (bodies or extension) are manifestations of one and the same being or substance. Kordela’s link between Spinoza and Marx shows that being consists of two aspects, value and power, the former leading to structuralist thought, the latter becoming the object of contemporary biopower. Epistemontology in Spinoza-Marx-Freud-Lacan intervenes between two dominant lines of thought in the reception of Marx today: on the one hand, an approach that relates Marxian thought to psychoanalysis from a Hegelian/dialectical perspective and, on the other hand, an approach that links Marxism to Spinozian monism, at the total exclusion of psychoanalysis.

This book will interest scholars and researchers who study Marxism, (post)structuralism, psychoanalysis, critical theory, ontology, epistemology and theories of representation, theoreticians of cultural studies and comparative literature, aesthetic theory, including the relation of art to economy and politics, and biopolitics.

1. Words and Things in the Era of Value, Power, and Biopower

2. Materialist Epistemontology: Marx and Sohn-Rethel with Spinoza and Psychoanalysis

4. Dialectics, or Valences of Structuralism

7. The Other Side of Value: Substance, Labor & Enjoyment, or, Biopolitics According to Spinoza, Marx & Lacan

A. Kiarina Kordela is Professor of German and Director of the Critical Theory Program at Macalester College and Honorary Adjunct Professor at the Writing and Society Research Center, University of Western Sydney, Australia. She publishes on topics such as literature, philosophy, psychoanalysis, critical, political, and film theory, intellectual history, and biopolitics. Kordela is the author of $urplus: Spinoza, Lacan (2007), Being, Time, Bios: Capitalism and Ontology (2013), coeditor with Dimitris Vardoulakis, of Freedom and Confinement in Modernity: Kafka’s Cages (Palgrave-Macmillan, 2011), and of Spinoza’s Authority: Resistance and Power, 2 Volumes (2017). Her articles have been published in several anthologies and journals such as Angelaki, Cultural Critique, Differences, History of Human Sciences, Modern Language Studies, Monokl, Parallax, Political Theory, Philosophy Today, Radical Musicology, Rethinking Marxism, Terroirs, The Lacanian Review Online, [email protected], Umbr(a), and World Picture.