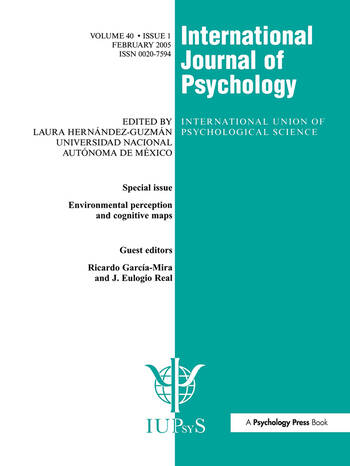 Environmental Perception and Cognitive Maps: A Special Issue of the International Journal of Psychology

Perception has always been conceptualized as one of the most relevant processes within General Psychology. Perception theories also constitute one of the most firmly grounded roots of psychological knowledge, and their increasing scientific contribution has been recognized and used in many different disciplines and fields of research. Environmental perception plays a similar role within the framework of Environmental Psychology. Research and theories in environmental perception have primarily focused on the development and processing of mental representations by subjects to better interpret and understand their surroundings. One of the first and principal concepts developed to investigate the mental representations of an environment is the cognitive map. Since Tolman coined the term, the concept of cognitive map has evolved to integrate many different sources which can influence such mental representations. The first of these sources is the environment itself. Studies on spatial orientation and spatial perception are primarily focused on the way that physical characteristics of the environment influence knowledge, wayfinding ability or orientation capabilities of the subjects.
All the papers in this special issue are proof of the complexity of issues involved in understanding the nature of the relations between people and the environment, as well as the large number of disciplines needed to deal with such phenomena. This issue seeks to shed some light on the various aspects which may be relevant or may contribute to theoretical developments in this scientific field.

Environmental Perception and Cognitive Maps: A Special Issue of the International Journal of Psychology