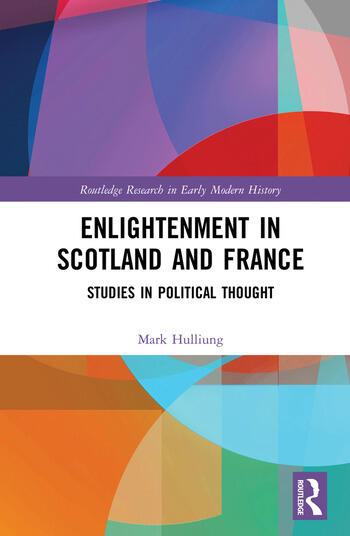 Enlightenment in Scotland and France: Studies in Political Thought

Enlightenment in Scotland and France: Studies in Political Thought provides comparative analysis of the Scottish and French Enlightenments. Studies of the two Enlightenments have previously focused on the transnational, their story one of continuity between Scottish intellectuals and French philosophes and of a mutual commitment to combat fanaticism in all its forms. This book contends that what has been missing, by and large, from the scholarly literature is the comparative analysis that underscores the contrasts as well as the similarities of the Enlightenments in Scotland and France.

This book shows that, although the similarities of "enlightened" political thought in the two countries are substantial, the differences are also remarkable and stand out in culminating relief in the Scottish and French reactions to the American Revolution. Mark Hulliung argues that it was 1776, not 1789, that was the moment when the spokespersons for Enlightenment in Scotland and France parted company.

2. Rousseau and the Scottish Enlightenment

I. Rousseau and Commercial Society

II. Did Adam Smith and the Scots Write in Response to Rousseau?

III. Reconsidering the Letter to the Edinburgh Review

3. Montesquieu in Scotland and France

4. Enlightened Morality in Scotland and France

I. From the Old Philosophy to the New: the Scots

II. From the Old Philosophy to the New: the French

III. From Ethics to Politics

5. Monarchies and Republics in Scotland and France

III. Monarchies and Republics in Scotland

IV. Monarchies and Republics in France

6. The Social Contract in Scotland and France

I. The Social Contract in Scotland: the Early Years

II. The Social Contract in Scotland: the Later Years

III. The Social Contract in France: from the Early to the Middle Years

IV. The Social Contract in France: from the Middle to the Later Years

V. The Social Contract and the American Revolution

Mark Hulliung is Richard Koret Professor of History, Brandeis University. He has published widely on topics concerning intellectual, cultural, and political history, both European and American. His works include The Autocritique of Enlightenment: Rousseau and the Philosophes and Montesquieu and the Old Regime.

Enlightenment in Scotland and France: Studies in Political Thought