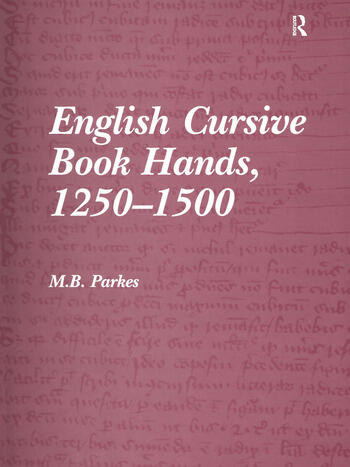 First published in 1969, English Cursive Book Hands rapidly established itself as a key resource for the study and teaching of palaeography. It covers the changes in handwriting that arose from the mid-twelfth century, tracking the growth and development of the cursive script that came to dominate book production in medieval England. This reprint is a re-issue of the 1979 second edition published by Scolar Press. This study sets out the nature of the developments which took place in English book hands, from the mid-twelfth century, largely determined by two factors: the increasing demand for books, and the increase in the size of the works to be copied. The secularization of learning and the rise of the universities created a voracious demand for texts and commentaries. At the same time improving standards of literacy led to a demand from a wide range of patrons for books of a more general nature. In such circumstances speed and ease of writing became increasingly important. Scribes began to use different kinds of handwriting for different classes of books, and as a result a new 'hierarchy' of scripts arose, each with its own sequence of development. Towards the end of the thirteenth century the cursive script which had recently been evolved for the preparation of documents was introduced into books. A hierarchy also arose in the cursive script itself, as scribes began to devise more than one way of writing depending on the degree of formality they required. Eventually the varieties of cursive usurped the functions of other scripts in the copying of nearly all kinds of books and documents. English Cursive Book Hands illustrates the developments which took place in the cursive handwriting used in England for writing books.

Contents: Introduction; A note on palaeographical terms; Select Bibliography; A note on the Transcriptions; List of plates. Plates, Notes and Transcriptions: Anglicana book hands; Anglicana Formata; Bastard Anglicana; The development of Secretary as determined by hands in documents; Secretary book hands; Bastard Secretary; The handwriting of university scribes; Developments in the hierarchy of scripts; The handwriting of individual scribes; Indexes.

'Few palaeographical handbooks achieve the status of classics, but Malcolm Parkes's English Cursive Book Hands 1250-1500 is beyond doubt one of them. Since it was first published in 1969 the accuracy of its judgements and the lapidary manner in which they are expressed have rendered it the touchstone for the description and analysis of later medieval English handwriting. It is a work of permanent significance, and its reappearance in a second reprint will be universally welcomed.' Richard Beadle, University of Cambridge, UK 'This is avowedly a teaching book, one from which a teacher can teach others, or a learner can teach himself.' Speculum 1971