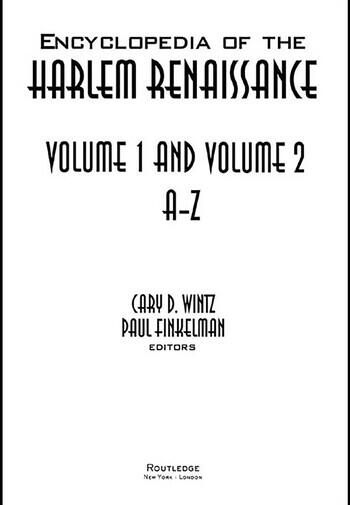 Encyclopedia of the Harlem Renaissance

From the music of Louis Armstrong to the portraits by Beauford Delaney, the writings of Langston Hughes to the debut of the musical Show Boat, the Harlem Renaissance is one of the most significant developments in African-American history in the twentieth century. The Encyclopedia of the Harlem Renaissance, in two-volumes and over 635 entries, is the first comprehensive compilation of information on all aspects of this creative, dynamic period.

For a full list of entries, contributors, and more, visit the Encyclopedi a of Harlem Renaissance website.

Cary Wintz is a professor at Texas Southern University, and his past publications include African-American Political Thought, 1890-1930: Washington, DuBois, Garvey, and Randolph. Paul Finkelman is President William McKinley Distinguished Professor of Law and Public Policy and Senior Fellow at the Government Law Center at Albany Law School in Albany, New York. He is the author of more than 150 scholarly articles and more than 25 books.

"Provides in-depth essays on the life and works of major writers, artists, and musicians of the period... Comprehensive... Thorough and well-organized reference work... Recommended for all libraries." -- Library Journal
"Well written and cogent... A significant and useful addition to reference works on the Harlem Renaissance... Accessible to readers on multiple levels and recommended for high school, college, and public libraries." -- Booklist/RBB (starred review)
"the most well-rounded portrait of the movement available on resource shelves... This outstanding guide is highly recommended for both public and academic libraries." -- Lawrence Looks at Books, Gale Reference Reviews
"Wintz and Finkelman's encyclopedia exceeds in power and scholarship all other reference works on the Harlem Renaissance... Coverage is broad, deep, and scholarly... Highly recommended. All collections." -- Choice
"Examining the political, economic, and social environment, as well as the artistic and cultural events of the Harlem Renaissance, these two volumes present some 625 entries, including essays on major writers, artists, and performers; discussions of creative works, especially those which had an impact on the development of the Harlem Renaissance." -- Reference and Research Book News
"The two-volume Encyclopedia is an invaluable resource that extensively documents the events, people, and importance of the Harlem Renaissance." -- American Reference Books Annual

Encyclopedia of the Harlem Renaissance