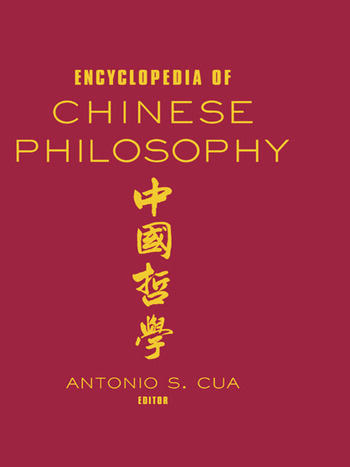 Featuring contributions from the world's most highly esteemed Asian philosophy scholars, this important new encyclopedia covers the complex and increasingly influential field of Chinese thought, from earliest recorded times to the present day.
Including coverage on the subject previously unavailable to English speakers, the Encyclopedia sheds light on the extensive range of concepts, movements, philosophical works, and thinkers that populate the field. It includes a thorough survey of the history of Chinese philosophy; entries on all major thinkers from Confucius to Mou Zongsan; essential topics such as aesthetics, moral philosophy, philosophy of government, and philosophy of literature; surveys of Confucianism in all historical periods (Zhou, Han, Tang, and onward) and in key regions outside China; schools of thought such as Mohism, Legalism, and Chinese Buddhism; trends in contemporary Chinese philosophy, and more.

Antonio S. Cua, currently on the faculty at The Catholic University of America, is a past president of the Society for Asian and Comparative Philosophy, and past president and chairman of the Executive Board of the International Society of Chinese Philosophy. Professor Cua's works include Ethical Argumentation: A Study in Hsün Tzu's Moral Epistemology, Unity of Knowledge and Action: A Study in Wang Yang-Ming's Moral Psychology, and many other books and journal articles.

"The first in the English language, this work provides an excellent introduction to Chinese philosophy... Essential. Undergraduates, Asian studies or philosophy students, researchers, and academic and public libraries." -- Choice
"A milestone, a welcome tome to fill a lamentable information-lacuna on Chinese philosophy... A monumental achievement and a landmark contribution." -- Dao: A Journal of Contemporary Philosophy
"A valuable reference book not only for those students and scholars in the field of Chinese philosophy but also for all philosophers who are interested in broadening their philosophical perspectives... A significant contribution." -- The Review of Metaphysics
"This reference work will realistically underpin undergraduate and graduate investigation into topics as wide apart as rights and moral action, scientism and logic...Will certainly guarantee wide sales, especially where Chinese philosophy and ethics are studies in English-language translation." -- Reference Reviews
"Those working in Chinese philosophy will welcome the publication of the Encyclopedia of Chinese Philosophy... generally useful and interesting." -- Philosophy East & West

"This massive Encyclopedia of Chinese Philosophy is a milestone, a welcome tome to fill a lamentable information-lacuna on Chinese philosophy in our contemporary scholarship." - Dao: A Journal of Comparitive Philosophy

"This Encyclopedia is a monumental achievement of Chinese philosophy in our contemporary world." - Dao: A Journal of Comparitive Philosophy