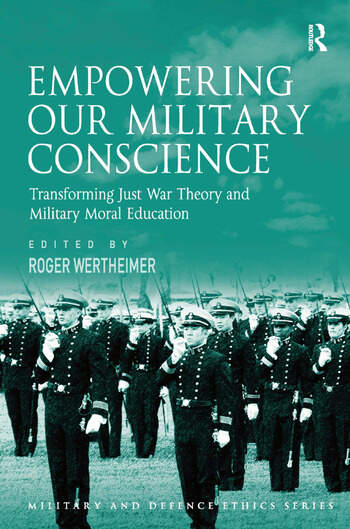 Responding to increasing global anxiety over the ethics education of military personnel, this volume illustrates the depth, rigour and critical acuity of Professional Military Ethics Education (PMEE) with contributions by distinguished ethical theorists. It refreshes our thinking about the axioms of just war orthodoxy, the intellectual and political history of just war theorizing, and the justice of recent military doctrines and ventures. The volume also explores a neglected moral dimension of warfare, jus ante bellum (the ethics of pre-war practices) - particularly jus in disciplina bellica (the ethics of educating for warfare). Using metaphor to exemplify the professionalization of the military, the book exposes ambivalences within military professionals' concepts of their professional responsibilities, analyzes issues of self-respect posed by service in an unjust cause, and surveys the deep conflicts inherent in PMEE. While primarily focused on US military academies, the volume will resonate with those responsible for education in military academies across the globe.

Roger Wertheimer is a Research Associate in the Philosophy Department of the Agnes Scott College, Decatur, USA

'A stimulating read, these nicely organized and well crafted essays do what’s urgently needed in our post-9/11 world: they reframe and reconsider venerable issues in the just-war tradition creatively and conscientiously. ' James Cook, US Air Force Academy, USA 'This collection of essays sheds important and interesting light on issues of contemporary just war and efficacy of ethics education in US military education. Highly recommended reading.' Martin L. Cook, United States Naval War College, USA ’This book provides an interesting collection of essays by prominent theorists as part of Ashgate’s ’Military and Defence Ethics Series’... These essays are thoughtfully written and recommended to scholars and others who are interested in JWT... Overall, this book is best described as providing three quite different collections of works, which have been published together under the common theme of JWT. The book is recommended to academic students of JWT. It is also likely to prove useful to motivated readers from the military profession who wish to challenge their understanding of this contested and developing field.’ Australian Defence Force Journal