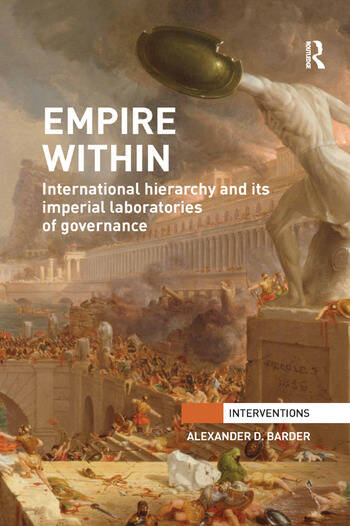 Empire Within: International Hierarchy and its Imperial Laboratories of Governance

This book explores the reverberating impacts between historical and contemporary imperial laboratories and their metropoles through three case studies concerning violence, surveillance and political economy.

The invasions of Afghanistan in 2001 and Iraq in 2003 forced the United States to experiment and innovate in considerable ways. Faced with growing insurgencies that called into question its entire mission, the occupation authorities engaged in a series of tactical and technological innovations that changed the way it combated insurgents and managed local populations. The book presents new material to develop the argument that imperial and colonial contexts function as a laboratory in which techniques of violence, population control and economic principles are developed which are subsequently introduced into the domestic society of the imperial state. The text challenges the widely taken for granted notion that the diffusion of norms and techniques is a one-way street from the imperial metropole to the dependent or weak periphery.

1. International Relations Theory: Hierarchy and the Problem of Empire

2. Imperial Laboratories of Violence: A Genealogy of the Camp

3. Imperial Subjects at Home and The Rise of the Modern Surveillance State

4. American Hegemony and the Neoliberal Laboratory in the Americas

Alexander D. Barder is a political scientist at Florida International University in the Department of Politics and International Relations. Barder is the author (with François Debrix) of Beyond Biopolitics: Theory, Violence and Horror in World Politics (Routledge, 2011).

Empire Within: International Hierarchy and its Imperial Laboratories of Governance