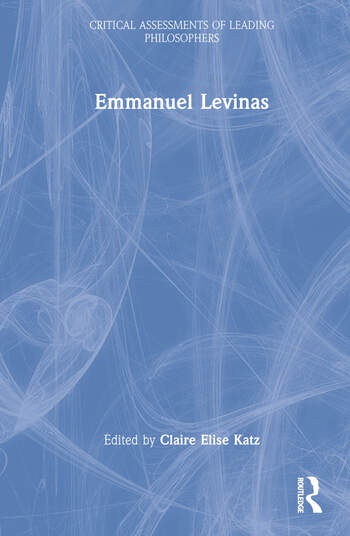 Emmanuel Levinas (1905-1995) was one of the foremost thinkers of the twentieth century. His work has influenced a wide range of intellectuals, from French thinkers such as Maurice Blanchot, Jacques Derrida, Luce Irigaray and Jean-Luc Marion, to American philosophers Stanley Cavell and Hillary Putnam.
This set will be a useful resource for scholars working in the fields of literary theory, philosophy, Jewish studies, religion, political science and rhetoric.
Titles also available in this series include, Karl Popper (November 2003, 4 Volumes, £475), and the forthcoming titles Edmund Husserl (2005, c.4 Volumes, c. £475) and Gottlob Frege (2005, c.4 Volumes, c. £475).

Volume 1: Levinas in Conversation with Contemporary Philosophy This volume includes essays elucidating Levinas's debt to figures such as Bergson, Heidegger, Merleau-Ponty, Husserl and Blanchot, but also shows the creative intersections between Levinas's work and contemporary thinkers such as Jean-Luc Marion and Gianni Vattimo.
Volume 2: Levinas and Judaism Levinas was read by some scholars as a specifically Jewish philosopher. This volume concentrates on a comparison between Levinas's thought and that of other Jewish thinkers, such as Franz Rosenzweig, Martin Buber and Paul Celan. The essays included here demonstrate the influence of these thinkers on Levinas's work and illustrate the common Jewish thread in their work.
Volume 3: Levinas and the History of Philosophy Levinas's work was influenced by the major thinkers in the history of philosophy such as Plato, Descartes, Spinoza, Kant and Hegel, but also less obvious figures including Kierkegaard, Nietzsche and Marx.
Volume 4: Levinas in Practice This final volume examines the influence of Levinas's work on different fields such as ethics, politics, the environment, race theory, religion, jurisprudence, international relations and feminism.