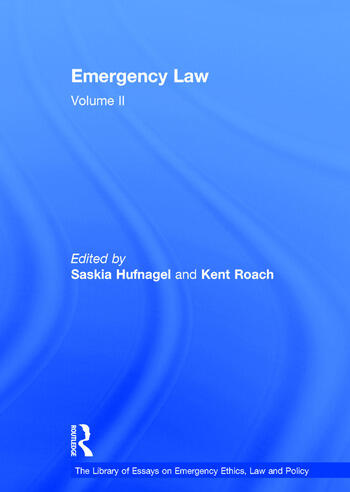 The essays selected for this volume provide a comprehensive overview of the philosophical, ethical, historical, legal and practical issues in the diverse field of emergency law. The essays focus on terrorist attacks and natural disasters and highlight the roles of a vast variety of actors, such as the military, fire services, health services, police, volunteers and many more. The volume reveals legislative trends in emergency law by combining different national, international and comparative legal perspectives on a number of different types of emergency situations. In addition, essays taken from a practitioner perspective provide insight into civilian and military emergency management on the ground and the frequently reoccurring legal challenges. By comparing different national approaches to emergency law and emergency management, this collection of essays goes beyond the narrow view of one political system and draws instructive conclusions relating to the similarities and differences between a variety of common law and civil law systems and constitutional set-ups.

Contents: Introduction; Part I The Evolution of Emergency Law: Schmitt v Dicey: are states of emergency outside the legal order?, David Dyzenhaus; One law for war and peace? Judicial review and emergency powers between the norm and the exception, Ian Zuckerman; The law of the exception: a typology of emergency powers, John Ferejohn and Pasquale Pasquino. Part II Emergency Law and the Interaction with Military Law: Defending Korematsu?: reflections on civil liberties in wartime, Mark Tushnet; North American emergencies: the use of emergency powers in Canada and the United States, Kim Lane Scheppele; While the government fiddled around, the Big Easy drowned: how the Posse Comitatus Act became the government's alibi for the Hurricane Katrina disaster, Candidus Dougherty; The military call-out legislation, Michael Head. Part III Emergency Law and Disaster Response: Mother Nature versus human nature: public compliance with evacuation and quarantine, Mary-Elise Manuell and Jeffrey Cukor; Collaboration and leadership for effective emergency management, William L. Waugh Jr and Gregory Streib; The federal response to Hurricane Katrina: a case for repeal of the Posse Comitatus Act or a case for learning the law?, Joshua M. Samek. Part IV Emergency Powers and the 'War on Terror': Emergency powers and the rule of law after 9/11, William E. Scheuermann; The emergency constitution, Bruce Ackerman; Constitutional norms in a state of permanent emergency, Sanford Levinson; Balancing security and liberty: critical perspectives on terrorism law reform, Simon Bronitt; German perspectives on the right to life and human dignity in 'the war on terror', Saskia Hufnagel. Part V All Risk Emergency Regulation or Case Specific Regulation: Governance of the critical national infrastructure, Clive Walker; September 11: consequences for Canada, Kent Roach; Extract fromTerrorism: supply and demand, Philip Bobbitt; Conclusion; Name index.

Saskia Hufnagel is a research fellow at the ARC Centre of Excellence in Policing and Security (CEPS) at Griffith University, Brisbane, Australia and Kent Roach is Prichard-Wilson Chair of Law and Public Policy at the University of Toronto Faculty of Law, with cross-appointments in criminology and political science, and a Fellow of the Royal Society of Canada.