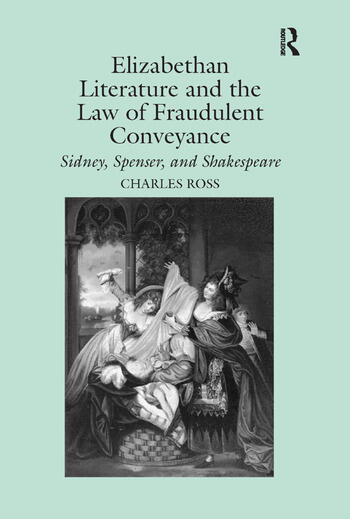 Elizabethan Literature and the Law of Fraudulent Conveyance: Sidney, Spenser, and Shakespeare

This book investigates the origins, impact, and outcome of the Elizabethan obsession with fraudulent conveyancing, the part of debtor-creditor law that determines when a court can void a transfer of assets. Focusing on the years between the passage of a key statute in 1571 and the court case that clarified the statute in 1601, Charles Ross convincingly argues that what might seem a minor matter in the law was in fact part of a wide-spread cultural practice. The legal and literary responses to fraudulent conveyancing expose ethical, practical, and jurisprudential contradictions in sixteenth-century English, as well as modern, society. At least in English Common Law, debt was more pervasive than sex. Ross brings to this discussion a dazzling knowledge of early modern legal practice that takes the conversation out of the universities and Inns of Court and brings it into the early modern courtroom, the site where it had most relevance to Renaissance poets and playwrights. Ross here examines how during the thirty years in which the law developed, Sidney, Spenser, and Shakespeare wrote works that reflect the moral ambiguity of fraudulent conveyancing, which was practiced by unscrupulous debtors but also by those unfairly oppressed by power. The book starts by showing that the language and plot of Shakespeare's Merry Wives of Windsor continually refers to this cultural practice that English society came to grips with during the period 1571-1601. The second chapter looks at the social, political, and economic climate in which Parliament in 1571 passed 13 Eliz. 5, and argues that the law, which may have been used to oppress Catholics, was probably passed to promote business. The Sidney chapter shows that Henry Sidney, as governor of Ireland (a site of religious oppression), and his son Philip were, surprisingly, on the side of the fraudulent conveyors, both in practice and imaginatively (Sidney's Arcadia is the first of several works to associate fraudulent conveyancing with the abduction of women). The fourth chapter shows that Edmund Spenser, who as an official in Ireland rails against fraudulent conveyors, nonetheless includes a balanced assessment of several forms of the practice in The Faerie Queene. Chapter five shows how Sir Edward Coke's use of narrative in Twyne's Case (1601) helped settle the issue of intentionality left open by the parliamentary statute. The final chapter reveals how the penalty clause of the Elizabethan law accounts for the punishment Portia imposes on Shylock at the end of The Merchant of Venice. The real strength of the book lies in Ross's provocative readings of individual cases, which will be of great use to literary critics wrestling with the applications of legal theory to the interpretation of individual texts. This study connects a major development in the law to the literature of the period, one that makes a contribution not only to the law but also to literary studies and political and social history.

Charles Ross is Professor of English and Chair of the Program in Comparative Literature at Purdue University; he is also a lawyer and a member of the Indiana Bar. He is author of The Custom of the Castle from Malory to Macbeth (University of California Press, 1997) and translator of Boiardo's Orlando Innamorato and Statius' Thebaid.

'A fine contribution to recent Law and Literature theory and practice, with intriguing readings of canonical and less well known texts. The application of debtor-creditor law is adept and helpful.' ”Richard Weisberg, Floersheimer Professor of Constitutional Law, Cardozo Law School and author of Poethics: And Other Strategies of Law and Literature 'We need books like this. Charles Ross provides a detailed, attentive analysis of the way great Elizabethan writers respond to what is arguably the most pervasive legal preoccupation of the period. This is an immensely readable study, beautifully written by someone who really understands the law, and”what is even more unusual”has taken the trouble to think deeply about its impact on early modern literature.' ”Erica Sheen, University of Sheffield, UK '... this impressively researched book, broadly innovative in its approach to works of literature, shows how historicist interpretations of Renaissance fictions gain meaning when they are read in light of contemporary statute and case law. It will encourage readers to pursue a more discriminate understanding of representations of power, authority, and statecraft than is possible without an investigation of legal issues.' The Spenser Review 'Elizabethan Literature and the Law of Fraudulent Conveyance combines the study of a very specific legal issue at a particular time with an expansive and metaphorical understanding of that issue such as to show how broadly it was at work in Elizabethan culture. Debt, Ross assures us, is more pervasive than sex and between 1571 and 1601 it functioned as a way of situating sexual a well as other matters in the cultural landscape. This was 'a great age for fraudulent conveyances' and Ross shows us how surprisingly central tot he culture such a practice became.' Renaissance Quarterly '... a book that is fascinating, highly original and persuasive in its interpretation of the interrelations between Elizabethan law practices and the chronicling and interrogating of these processes in the period's literary culture... an important and original work in the growing body of research on the overlapping areas of literary achievement and political history and the added dynamics of early modern law theory and its cultural practice... an academic interested in Elizabethan law should find a wealth of exciting material.' Literature Compass '... a genuinely cross-disciplinary book about fraud and deception, debtors and creditors.' Studies in English Literature '... compelling and insightful... this book deserves attention and serves a useful purpose in both legal and literary studies.' Sixteenth Century Journal '... Charles Ross offers a cogent, carefully researched contribution to this scholarship, exploring thre reasons that laws about fraudulent conveyance dominated English legal and literary discourses between 1571 and 1601... This is an erudite study, and Ross makes a strong case for his claim that between 1571 and 1601, 'the connection between the rights of creditors and the needs of the Crown created a broad field of play for Sidney, Spenser, and Shakespeare.' Clio

Elizabethan Literature and the Law of Fraudulent Conveyance: Sidney, Spenser, and Shakespeare