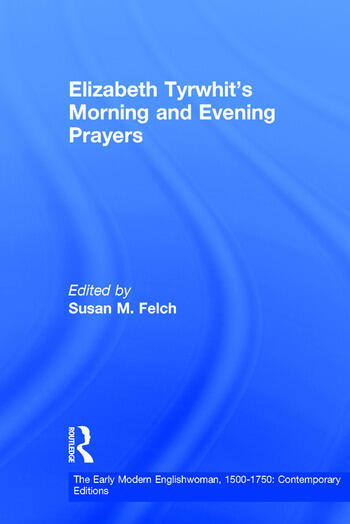 In 1574, Christopher Barker published a volume of prayers and poems collected and composed by Elizabeth Tyrwhit, an intimate member of Katherine Parr's circle, governess to the princess Elizabeth, wife of a Tudor court functionary, and a wealthy widow. Later, Tyrwhit's Morning and Evening Prayers was selected by Thomas Bentley to be republished in his 1582 compilation of devotional works, The Monument of Matrones. This volume presents critical, old-spelling editions of both versions of Morning and Evening Prayers. Placing them side by side, Susan Felch discloses that the second version contains nearly a quarter more material that the first, and is organized quite differently. Felch convincingly argues that the additional material and revised arrangement of the longer version are likely copied direct from another, no longer extant authorial version, either printed or manuscript. In the volume's introduction, Felch provides background on Tyrwhit's life and family, including new information unearthed in her research; and sets Tyrwhit's work within the context of sixteenth- century English prayerbooks. Felch here posits that Tyrwhit's reorganization and framing of traditional material indicates her own considerable creativity. The Textual Notes and Appendix A compare the 1574 and 1582 versions and identify the source texts from which Tyrwhit derives her prayers and poems. The edition is completed by an autograph note by Tyrwhit; a discussion of the Tyrwhit family connections, and several versions of the rhymed Hours of the Cross as background to Tyrwhit's rendition entitled, 'An Hymne of the Passion of Christ'.

Susan M. Felch is Professor of English at Calvin College, USA. She is the editor of The Collected Works of Anne Vaughan Lock (1999) and several other books as well as the author of numerous articles on sixteenth-century British literature.

Winner of the Josephine Roberts Scholarly Edition Prize, awarded by the Society for the Study of Early Modern Women in 2009 ’The material in Tyrwhit’s texts will be of great interest to scholars not only of Early Modern women’s writing, but also of devotion, devotional poetry, and the English Reformation. Tyrwhit’s prayers, and the critical material supplied by Felch, provide evidence for the centrality of women to religious reform in sixteenth-century England. ...Our understanding of private - or at least individual - devotion in the period is at an early stage, and Felch’s edition (like her earlier edition of Anne Vaughan Lock’s work) is a significant and authoritative contribution to the field.’ Parergon ’Felch adeptly guides the reader through a complex piece of literary criticism, while also engaging with the religious milieu which provided the historical context for the text’s composition and reproduction. The author’s analysis provides an authoritative addition to our knowledge of early modern devotional works produced by women, as well as a comprehensive piece of literary criticism in its own right.’ English Historical Review