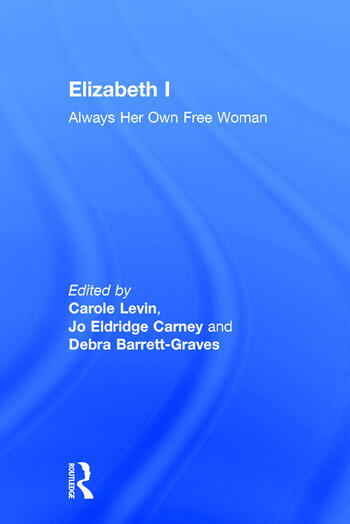 Elizabeth I: Always Her Own Free Woman

This interdisciplinary collection by historians, cultural critics and literary scholars examines a variety of the political, social, and cultural forces at work during the English Renaissance and beyond, forces that contributed to creating a wealth of artistic, literary and historical impressions of Elizabeth, her court, and the time period named after her, the Elizabethan age. Articles in the collection discuss Elizabeths' relationships, investigate the advice given her, explore connections between her court and the arts, and consider the role of Elizabeth's court in the political life of the nation. Some of the ways Elizabeth was understood and represented demonstrate society's fears and ambivalence about early modern women in power, while others celebrate her successes as England's first and only unmarried queen regnant. This volume will be of interest to scholars and students in a wide range of disciplines, including literary, cultural, historical and women's studies, as well as those interested in the life and times of Elizabeth I.

'The many reconsiderations of Elizabeth now available make it easier than ever to devote courses in history, literature, political science and women's and gender studies to the enigmatic queen. Elizabeth I: Always Her Own Free Woman would be an excellent ancillary text for such courses, while its copious notes and abundant bibliography also make it a useful resource for advanced scholars.' H-Albion '... though in her own time Elizabeth had detractors and though later writers have sometimes recognized her darker side, overwhelmingly, the plethora of volumes marking the 400th anniversary of Elizabeth's death have been celebrations of the wily queen. Elizabeth I: Always Her Own Free Woman must surely rank as one of the strongest of these celebrations. Each of its components - an introduction, twelve essays, an afterword, and a bibliography - is a delight.' Renaissance Quarterly 'The essays in this collection demonstrate that early modern English queenship cannot be completely understood through the lens of political, religious, or diplomatic sources. The authors add cultural and literary sources to traditional historical source material, but they do not contextualize Elizabeth into a fictive queen brimming with female agency. Instead, they constitute a complex and astute monarch who won the loyalty of her subjects by successfully identifying herself with her country.' Sixteenth Century Journal 'The book's interdisciplinary approach, its theoretical presuppositions, and the current attraction of the queen it celebrates will ensure that it is read with interest by a wide range of literary critics and historians.' The Historian

Elizabeth I: Always Her Own Free Woman